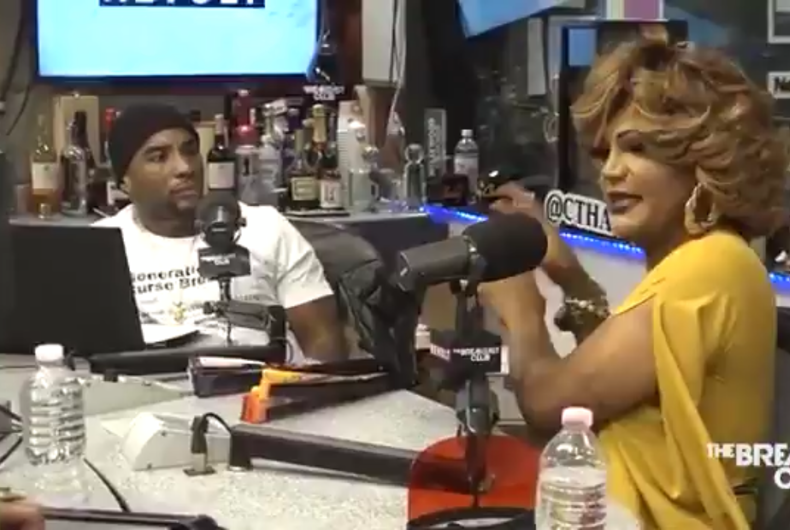 If LGBTQ people stop “force-feeding” our “lifestyle” on straight people, we can be “neighbors” with homophobic people. At least, according to one transgender entertainer.

Flame Monroe, who has labelled herself as both a drag queen and “comedian who happens to be transgender”, said as much in clips of her recent segment on the Power 105.1 radio show The Breakfast Club that has spread across social media. While out promoting her episode in Tiffany Haddish’s upcoming Netflix special, Monroe consistently blames the LGBTQ community for being ‘insensitive’ or ‘forceful’ about their existences and fight for their rights, just a day after claiming that Mo’Nique was a transphobic ‘hypocrite’ to her, and insinuating that Mo’Nique’s husband was gay.

In the clip that has nearly 500,000 views on Twitter alone, you can here Monroe explain her desire for LGBTQ people to stop making their existences known.

I keep saying, the world is not going to see us. We keep asking for inclusion – ‘inclusion, inclusion, inclusion’ – and if you force feed anything on anyone, you make them hate. The gay community – my community, my community – we are forcing. ‘Take us, see us, accept us, let us be with you’…you don’t need to get down with my lifestyle. That don’t mean I can’t be your neighbor. I can live next door to this ni**a…I ain’t got to go to his house and barbecue – [referring to Charlemagne da God] he probably don’t season his food right anyway – I ain’t got to go to his home and barbecue, but we can co-exist in the same neighborhood, if I stop trying to put my lifestyle to make him accept what I am. I don’t ask him what he’s doing…my business ain’t his business and his business ain’t my business…but that ain’t what we want.

In the opening of her 30-minute trek on the hip hop morning radio show, co-host Charlemagne da God lets Monroe know that an employee on the show is a fan of hers, to which she replies, “I only have one fan here?” to which there’s an awkward pause of silence, in which she uses the opportunity to give out her own hand fans while the co-hosts snicker.

Monroe then explains her #HeSheWe” branding, which is derived from her choice pronouns – he, she, or we. Responding to Charlemagne’s questions about Monroe’s booking email, Monroe says that these are her pronouns because “he cash the check, she get the money, we spend it – same b*tch right here…one b*tch. The man in me has been pimping the woman in me for 25 years.”

“Those are my own created pronouns because the tr**nies, the gay community so up in arms about the whole pronouns, what names to call me. Ni**a, did the check clear? That’s all I need to know,” Monroe continues.

Later on, she describes herself as a proud father, a comedian, and “part of the LGBTQ community – only four hours a day though, make sure you put that on record.” In further explaining those choice of words, Monroe claims that she is only temporarily part of the community when “the check [is] involved,” because “she still enjoys her FTM, my lesbian studs.” She says she only has sex with women, and is attracted as “very masculine women that only idenitfy as men.”

Monroe continues to explain her sexuality, claiming she does not want to “confuse” the radio hosts “like that last set of tr**nies y’all had on here.”

“This shit right here is how I look right now,” she refers to her feminine appearance, “when this shit is over, this wig will be in the back of the Lyft, taking me back to my hotel.” When Charlemagne further pushes Monroe to clarify her identity, asking for “the technical…y’know, politically correct term,” to which Monroe responds “this is it right here.”

“All of these labels and title…you can identify as a blue, orange cow, a pink moon and a green – when you get in a bed with somebody, do you want a penis or some vagina? ‘Cause they ain’t got nothing else.”

“I’ve been around the world three times,” Monroe continues, “if they got some other sh*t, and I ain’t have it, I feel cheated.”

In continuing this mind-numbingly ignorant conversation, Charlemagne asks Monroe about “someone that just wants butthole?” to which Monroe claims “that’s not a sexual orientation…the butthole’s not a gender” because “everyone has a gender – a penis or a vagina.”

Utter bullshit. Flame doesn’t know what the hell she’s talking about. She’s just fueling the bigoted argument that if we stop INSISTING on our right to exist safely, homophobes/transphobes won’t be as offended and they’ll stop oppressing/murdering us. This is ignorant AF. https://t.co/DxXrgKOV89

The rest of the interview is just as bad. Monroe compliments her friend and fellow comedian Tiffany Haddish after explaining their friendship, calling Haddish “a whole woman.” Charlemagne asks her immediately, “what’s the difference?” to which Monroe answers, “[we’re] just faking and shaking and flaking.” Monroe discusses the Malik Yoba ‘situation’, in reference to another Breakfast Club segment in which the show interviewed the actor and he identified as a transgender-attracted man. Monroe claims that his interview “was the most confusing sh*t I’ve seen…and I’m part of the LGBT, ABCDEFG-PTSD community.” While the co-host snicker at Monroe’s mockery, she claims that while “she loves her trans sisters,” that there is no such thing as ‘trans-attracted’ because “there are beautiful woman [who are] already made,” and that there “ain’t no woman with penises,” telling Charlemagne she should of “torn into [Yoba’s] ass” for claiming that.

“I know some of my sisters are going to be upset with me, but b*tch, y’all ain’t gonna do sh*t,” Monroe added while pulling out her hand fan.

Charlemagne tells Monroe that it’s up to her to “have to have those conversation with them,” referring to LGBTQ people. “All I’m there for in situations like that is to listen….all I can tell them is, ‘that’s not what I learned growing up.'” Monroe agrees with Charlemagne, saying that at the end of the day he’s just “an impersonator”. Charlemagne then begs people to give Monroe more of a “platform” with LGBTQ people, because “God damn it, can somebody talk reality sometimes?” Monroe then complains about the backlash she already receives from her comments, upon which Charlemagne responds, “imagine how much we get – and we’re not part of the [LGBTQ] community.”

That’s when Monroe made her viral comments written above, while Charlemagne claims that’s what makes them able to ‘co-exist’ together: “If you can laugh and talk shit, we good, I don’t give a fuck what you are or what you do.”

Charlemagne asks next what Monroe thought about Dave Chappelle’s remarks about the LGBTQ community in a recent Netflix special, something Monroe had already discussed to Out Magazine in September. Monroe reiterates her same points from that interview, answering that “Chappelle was wonderful” and “spot on” before Charlemagne finished the question, “except for one thing,” she says. She touches on Chappelle’s metaphor of LGBT people in a car by saying he was wrong, because “tr**nies [are] not even in the car, we’re on the side car.”

They next touch on ‘patriarchy’, but veer into transgender athletes, or “men competing in these women’s sports, and dominating,” Charlemagne explains that he believes “that don’t seem right…it’s like you’re trying to erase their existence,” to which Monroe agrees, “that’s not right.” She claims that “tr**nies” should have their “own lanes” instead of competing with cisgender people, and that they compete in these sports as an excuse to “beat up on women for free” and promotes the idea that all transgender women or inherently “stronger” than cisgender women.

When Envy tells her that her continued use of “tr**nies” is not a proper term, she proudly starts listing the terms she’s “allowed to say” because she’s part of so many communities, weirdly including “vagina”. Monroe then proudly owns the “problematic” label that Envy jokingly gives her.

I love me some Flame Monroe but this Breakfast Club interview is sooo cringeworthy. I totally respect how you choose to identify as a being but let’s not go around saying shit that’s gonna undo all the education and progress others have made. pic.twitter.com/oCT746wijW

These obviously ignorant and bigoted remarks from the interview have of course, angered several people in the LGBTQ community, but also anyone with human decency. Besides being just generally wrong about everything, the interview and its virality just sets back the ‘progress’ toward rights and protections that transgender people are fighting for, which is the same issue Monroe claims transgender people are prevented from participating in. Instead of using her ‘platform’ to promote the issues facing those with her identity, she just continues to cater to straight peoples’ perception of them.

I really hate how Flame Monroe spewed the that toxic ass narrative that purposely misconstrues the LGBTQ community wanting representation in culture as "forcing" it on people. Especially on The Goddamn Breakfast Club, where their homophobic audience is gonna cling to it… pic.twitter.com/mX1SgLpLXz

Oh, and by the way, 22 transgender or gender non-conforming people have been fatally shot or killed violently so far this year.

One of Trump’s bigoted, anti-LGBTQ employees will now sit on the federal bench