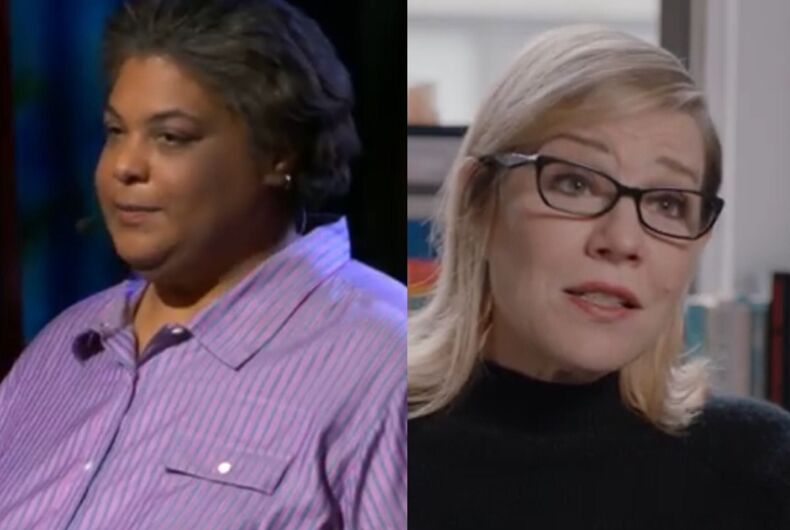 As reported by Autostraddle and The Advocate, Millman confirmed the news via Instagram on Wednesday, November 13th. Gay confirmed via Twitter as well. The duo was first confirmed as a couple in June.

Millman is known primarily as the host of the award-winning, Michelle Obama-loved podcast “Design Matters“, which she has been at the helm for for 15 years. “Design Matters” is described by Millman as the “The world’s first podcast about design.” She is also a chair of the Masters in Branding program at the prestigious School of Visual Arts (SVA) and President Emeritus of the American Institute of Graphic Arts (AIGA).

Millman has also authored six books, including Self-Portrait of Your Traitor (2013) – which has won several awards such as the Gold Mobius Award and Art Directors Club medal – and Brand Bible: The Complete Guide to Building, Designing, and Sustaining Brands (2012). Millman, who identifies as a lesbian, is credited with designing or overseeing the development for brands such as HOT 97, Burger King, Hershey’s, Star Wars, and Mariska Hargitay’s Joyful Heart Foundation.

Gay is known primarily as the author of the critically praised essay collection Bad Feminist (2014), and is a New York Times Opinion contributor. She is a Yale graduate (and once visiting professor), and received her Ph.D. from Michigan Technological University (MTU). Gay has become an influential voice on body positivity, feminism, and much more.

The Haitian-American has also written the comic book spin-off series of Marvel’s Black Panther, entitled World of Wakanda (2016) and the memoir Hunger: A Memoir of (My) Body (2017). She is the Founding Editor of the Medium.com-hosted publication Gay Magazine, after serving previously as an editor at the publications The Butter. Gay identifies as bisexual and has won several Lambda Literary Awards. In 2017, we reported that Gay had withdrew a book of hers from the publishing company Simon & Schuster because they were publishing a book from Milo Yiannopoulos on a different imprint.

Ahhh! Yes, I am indeed engaged to @debbiemillman! It is very exciting! Thank you ALL for the kind words and congratulations.

In June, at the A-Camp hosted by Autostraddle, the couple shared the stage while confirming their relationship. They spoke about how they hoped to have a love that could last at least 40 years, and Millman admitted she wanted more publications to cover their relationship. “Roxane Gay has a girlfriend! That’s BIG news,” Millman was quoted. “I’m the luckiest woman alive…it was the first time in my life that I aggressively went after someone,” she said.

“And it was the first time in my life that anyone aggressively pursued me,” Gay responded.

We wish the couple all the happiness and success in their relationship!

Caitlyn Jenner may be planning a comeback onto reality television