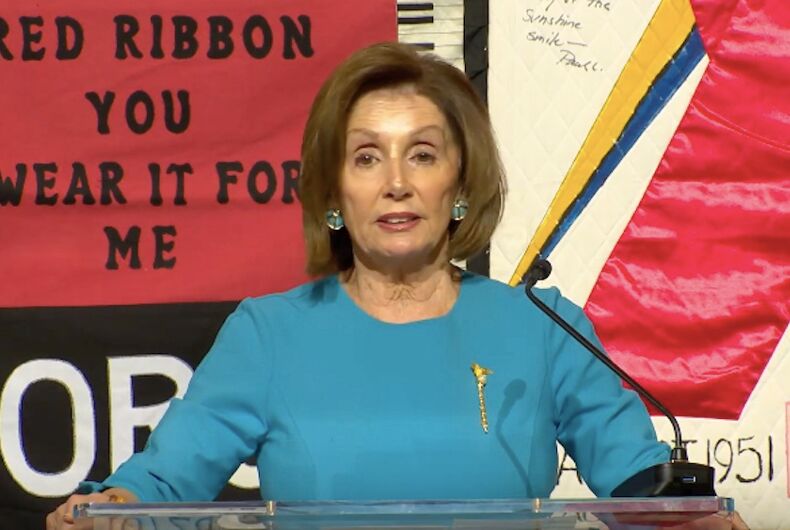 All 50,000 panels and 54 tons of the NAMES Project’s AIDS Memorial Quilt are going to be moved from its current storage in Atlanta to San Francisco where its first panels were initially created by grieving survivors of the epidemic. There, the quilt will remain under the permanent care of the National AIDS Memorial Grove (NAMG), a non-profit that maintains a 10-acre place of remembrance in Golden Gate Park.

“Additionally, the Library of Congress will preserve the quilt’s vast archival collections in Washington, D.C.,” writes The Bay Area Reporter. After transferring possession of the quilt, the NAMES Project will transfer its operations to NAMG and then cease to exist by the end of 2020.

Related: The CDC Director got shouted down by angry AIDS activists during a completely tone deaf speech

The Quilt will eventually become part of the NAMG’s “Center for Social Conscience” which will focus on the cultural impact, social justice, action and fight for human rights that arose from the AIDS epidemic. The Center itself hopes to serve as a platform for social justice.

“This decision has been part of the long-term planning,” the NAMES Project writes. “In doing so, [we hope to] secure not only the legacy of the quilt, but also its ability to teach for generations to come.”  The NAMES Project had cared for the quilt since 1987.

Meanwhile, the Quilt Archives will find a new home in the American Folklife Center at the Library of Congress. The archives consist of 200,000 items like “biographical records, correspondence, photographs, tributes, epitaphs, news clippings, and artifacts submitted by panel makers that add context about the lives memorialized on the quilt panels” and also chronicles the making and care of the quilt itself.

The announcement was made this morning in the Library of Congress’ Great Hall. There, House Speaker Nancy Pelosi (D-CA), Rep. John Lewis (D-GA), and Rep. Barbara Lee (D-CA) were joined by the “founders of the quilt, families who lost loved ones to AIDS, quilt panel-makers, representatives from the NAMES Project Foundation, National AIDS Memorial, Library of Congress, AIDS organizations and long-time supporters,” according to the NAGM.

“On behalf of the people of San Francisco, it is a privilege to welcome the AIDS Memorial Quilt permanently back to the Bay Area,” said Pelosi.

In a December 2017 interview with Fresh Air, longtime LGBTQ activist Cleve Jones said he came up with the idea for the quilt on November 27, 1985, during an annual candlelight tribute for assassinated gay politician Harvey Milk and then Mayor George Moscone.

Struck by the epidemic’s 1000-person death toll, he had attendees write the names of their deceased loved ones on poster boards that they they posted onto the front of building that housed the Health and Human Services West Coast offices for the federal government, then under the Reagan administration which refused to publicly acknowledge the epidemic until four years after it started.

Each panel is three feet by six feet, the approximate size of a grave, Jones says. “The last display of the entire quilt was in 1996 when we covered the National Mall from the steps of the Capitol building all the way to the Washington Monument,” he adds.

Here is video from today’s announcement: