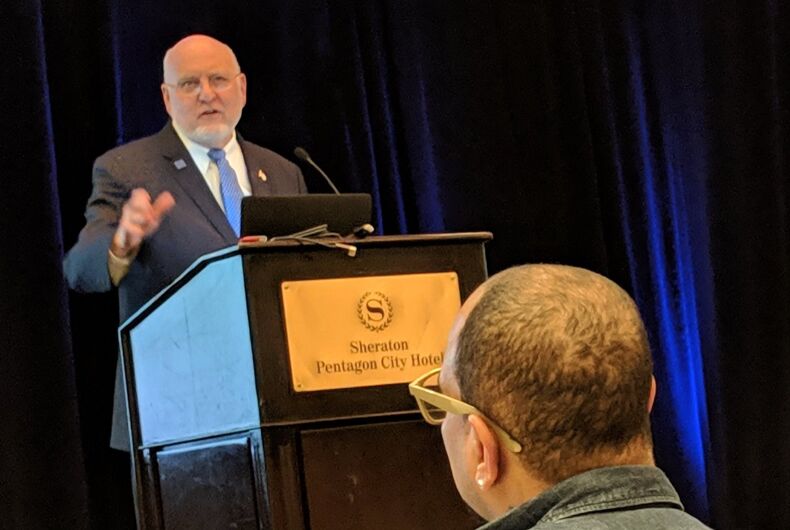 Dr. Robert Redfield, director of the Centers for Disease Control, was shouted down by activists during a speech to the AIDSWatch conference after he refused to explain why the government agency wasn’t enforcing its patent on the HIV drug Truvada.

“We now have the tools,” we need to “come together,” and we can “bring this dream into reality,” he said during his speech, which the NY Daily News called “familiar, if now-repetitive talking points about the end of the epidemic.”

Thirty minutes into Redfield’s remarks, an audience member shouted out that the administration should “leave the affordable care act in place” if the government truly wished to bring an end to the epidemic. “The room erupted in pandemonium,” Mark S. King, a nationally recognized activist and contributor to LGBTQ Nation, told the paper.

When it was time for the Q&A portion of the presentation, the audience was ready to do battle. The first question was about Gilead Science’s monopoly on pre-exposure prophylaxis medication (PrEP).

Related: Politicians are asking the feds to ‘break the patent’ on PrEP to make it more widely available

King has written previously about the controversy for LGBTQ Nation.

Truvada is a drug that has been used for many years as a treatment for people with HIV. When the United States government researched the use of Truvada as the first drug for pre-exposure prophylaxis (PrEP), U.S. taxpayers footed the bill for that research. The clinical trials, the research and development, all of it was paid by our government. We, as U.S. citizens, were the investors. Gilead, the pharmaceutical company that makes Truvada, did not spend any money on the research and development of ‘Truvada as PrEP.’

So, when Truvada proved successful in preventing HIV infection, the patent for the use of Truvada as PrEP became the property of the government, not Gilead. The Centers for Disease Control and Prevention (CDC) owns the patent on Truvada as PrEP. Our tax dollars paid for it.

That means that every time Gilead sells a Truvada pill to be used as PrEP, the CDC can legally collect a royalty on that sale. Considering Gilead typically charges over $2,000 per month for the drug and it costs them less than six bucks to manufacture it, that’s a pretty sweet profit margin.

“Will the CDC request a review of the CDC’s patents and Gilead’s production of Truvada as PrEP in order to obtain possible royalties from Gilead as resources to fund the HIV preventive portfolio and PrEP access?,” Jesse Milan, Jr., CEO of AIDS United asked Redfield.

“Well, I know you are not going to like my answer,’” Redfield replied as attendees grumbled. “I can’t comment on any possible negotiations going on with any entity.”

“We funded [the research]. You could get us a seat at the table,” James Krellestein of the Prep4All Collective shouted back. “We watch our friends get sick because they can’t afford a drug that costs $6 to produce, and they charge $2,000 for it.”

If generic PrEP exists overseas, Krellestein asked, “Why can’t we get it over here?”

“We pay for it,” PrEP4All member Nick Faust added. “You take our money, but you don’t let us have a voice.”

“We had a team at Yale Law School examine the patents,” James explained to LGBTQ Nation. “This is real. The CDC owns these patents and they could demand tomorrow that Gilead retroactively pay royalties to the government, money that could be used to fund a national PrEP program. These royalties are ours, as U.S. taxpayers. And, as the patent owner, the CDC could also demand that Gilead reduce the price of the drug.”

“We have not received an answer from the CDC,” James said. “The most insulting thing of all is that the CDC responded ‘no comment’ when the Post asked them why they are not enforcing the Truvada as PrEP patent. They won’t even dignify the question with an answer. We deserve an answer. The HIV community deserves an answer. The United States taxpayers deserve an answer.”

But they didn’t get one from Redfield. He left the stage without ever answering the question.