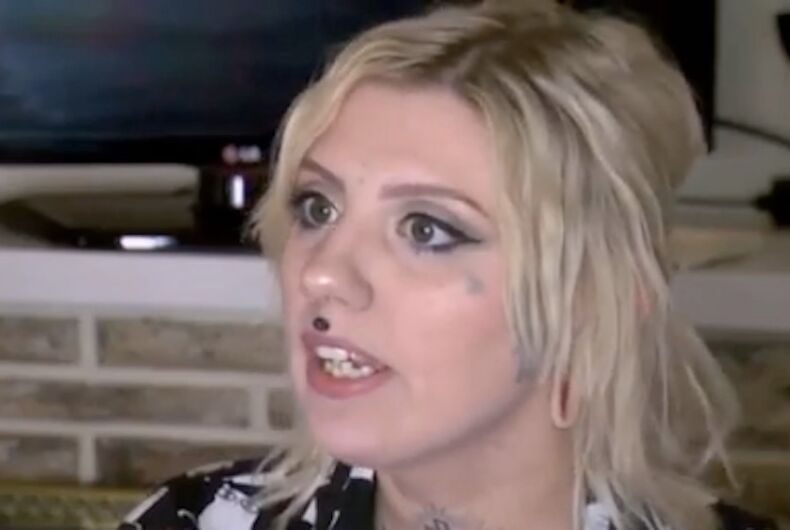 Brittany Spencer — a waitress at Fat Joe’s Bar & Grill in Fond du Lac, Wisconsin — claims she was fired for refusing to serve two elderly customers who were openly criticizing a transgender patron.

Spencer told TMJ4, “They were asking me if I thought it was disgusting and wrong and why we would let somebody like that into the establishment. To which I answered, ‘No, I don’t agree with that,’ and I walked away.”

When Spencer asked her manager if she could get another employee to serve the transphobic customers, her manager “essentially told [her] to suck it up or go home,” Spencer says. “To which I responded, ‘Okay, I’m going to leave.'”

Spencer was told that she and the management would discuss the incident the next day, but Spencer went home and posted about it on Facebook. The next day at the restaurant staff meeting, management informed her that she’d be fired.

In response, she told her Facebook followers about her firing and told them to leave negative reviews on the restaurant’s Facebook page.

The restaurant’s co-owner Tad Wallender told The FDL Reporter he has had to shut down the restaurant’s Facebook page and has received threatening phone calls and emails.

If you’re not going to serve your table, then we’re just going to send you home…. She just took her moral beliefs and refused to do a duty that we hired her for. I’ve been in the service industry for a good 15 years and I’ve heard hundreds of conversations I didn’t agree with, but it’s just a matter of fact of just brushing it off and [being] able to tough through your task.

Wallender added that if any server refused to serve a trans patron, they’d be sent home too.

Spencer stands by her decision though. “[I think] if anybody sees hate or hears things like this that they should say something,” she said, “because… ignoring it is no better than saying it yourself.”

A musical theater teacher was outed to her bosses. She was fired immediately.