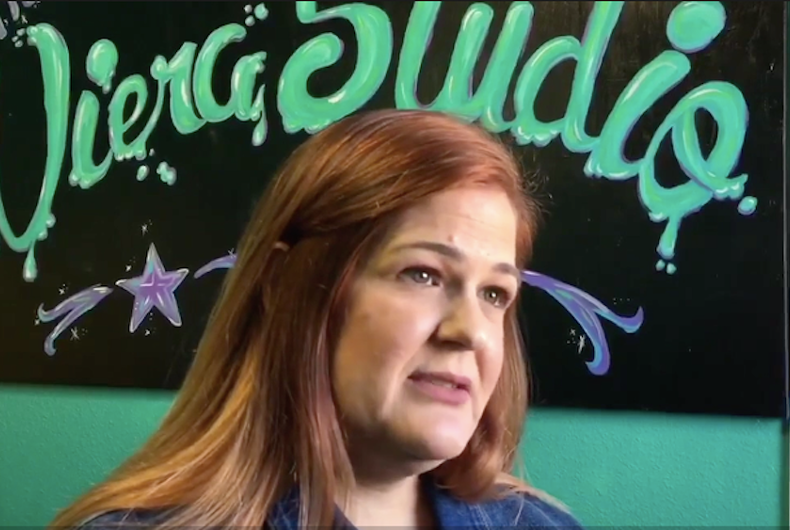 On October 2, administrators at Covenant Christian School in Palm Bay, Florida, summoned part-time musical theater teacher Monica Toro Lisciandro to tell her that someone had anonymously called the school accuse her of being in a relationship with a woman, attending a Pride festival, and hosting an LGBTQ group in her private acting studio.

“Well, it’s true,” Lisciandro replied. Soon after, the school fired her even though she had taught there for the last three years and was in the middle of directing the musical You’re a Good Man, Charlie Brown. The school then informed parents via letter that she’d no longer be teaching due to “personal reasons.”

Now Lisciandro is speaking out.

“I can’t be silent about it,” she said. “I want kids to see me and know that you can be a Christian and you can be gay. You can be gay, you can teach at a Christian school…. to think that something like this could happen to them makes me feel really upset and angry, because they deserve better.”

Florida lacks a law guaranteeing workplace protections for LGBTQ people, and even if it did have one, it’s unclear whether it would stop discrimination at church-affiliated schools.

The school participates in the state’s voucher program, meaning that it receives government funding. But that’s perfectly legal in Florida.

According to Florida Today, Lisciandro owns the Viera Studio for the Performing Arts in Suntree, Florida. The studio hosts the Rainbow Project, an LGBTQ youth club.

Of course, Lisciandro isn’t the first teacher to be fired from a religious school for being LGBTQ. The Trump administration’s Department of Justice (DOJ) recent filed a “Statement of Interest” letter to a court supporting the right of religious schools to fire LGBTQ faculty.

The school says it is “aggressively pursuing” another teacher to finish the musical theater class and direct its musical.

An earlier version of this story did not correctly state the name of the city the school is located in. We apologize for the error.

A waitress refused to serve 2 transphobic customers. She got fired.