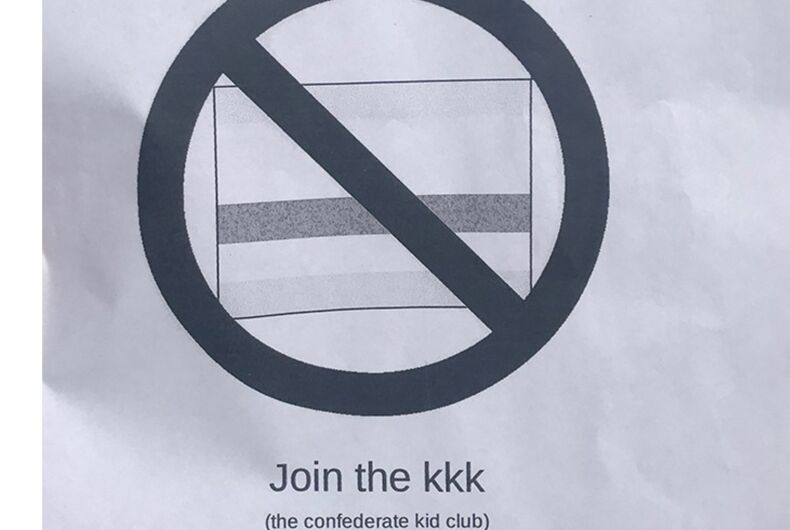 Kaycee Cook, a substitute teacher at McCormick Junior High School in Cheyenne, Wyoming, has been fired after she reported students wearing confederate flag t-shirts who were handing out disgusting racist and homophobic fliers in the school. Cook was also the advisor for the school’s Gay Straight Alliance club.

The fliers read “It’s great to be straight it’s not OK to be gay” and “Black lives only matter because if it weren’t for them who would pick our cotton”. The flier, which was also taped to walls in the school, ended with encouragement for students to join the “kkk” – the “confederate kids club.”

Principal Jeff Conine told the Wyoming Tribune Eagle that two posters were placed on the wall and removed by teachers before the school day started. Other reports from students and staff say that the school’s walls were “plastered” with the fliers and kids in confederate flag t-shirts were handing them out between classes.

Related: Arizona is being sued for banning teachers from speaking positively about LGBTQ people

Conine also confirmed to Burlingame that a student had shouted “faggot” at GSA students during one of their meetings. The student was scolded as punishment, he said.

“I don’t believe this is a prevailing sentiment that exists in the school,” he said.

Cook, however, says that almost all of the GSA members have reported harassment and bullying during the school year and that the past few months have been particularly hard for the youth. She says her complaints to the administration were ignored.

“I have kids who don’t attend GSA anymore because they’re bullied for being members,” she said.

Students have also reported that some teachers won’t use the appropriate pronouns for them and they have been called “disgusting” by faculty members.

After the meeting, Burlingame said she was encouraged the principal agreed that LGBTQ and black students should feel safe at school, but “Unfortunately, I think Principal Conine wants to minimize the incident and not see it as a part of a larger trend,” she said. “I don’t think vulnerable students have that same privilege.”

But after Burlingame met with Conine, Cook found out she was out of a job. In a terse email, Conine told her that she was “no longer welcome as a guest or substitute teacher in our building.” He refused to comment on why he had terminated Cook, but she thinks it is because she blew the whistle on the school’s tacit acceptance of racism and homophobia.

The email also instructs Cook that she can only visit her husband, who is a full-time teacher at the school, when students are in his classroom.

After Cook was fired the school district has promised to look into the situation and offered “support to our LGBTQ and black students who were reportedly targeted through the incident.”

Burlingame, who is also a state legislator, says the statement is encouraging, but “Unfortunately, I don’t really feel the principal, Jeff Conine, shares that goal.”