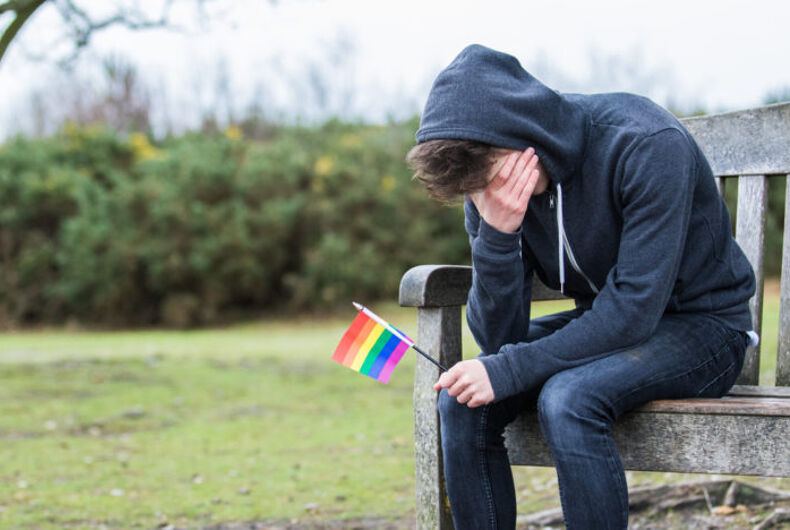 The state of Arizona is being sued over its law that bans schools from speaking positively about homosexuality.

State law in Arizona prohibits sex education at public and charter schools that “promotes a homosexual lifestyle,” “portrays homosexuality as a positive alternative lifestyle,” or “suggests that some methods of sex are safe methods of homosexual sex.”

The National Center for Lesbian Rights and Lambda Legal have filed a federal lawsuit on behalf of Equality Arizona and a 12-year-old queer non-binary student who goes to school in Tuscon.

The lawsuit says that students’ Fourteenth Amendment Equal Protection rights are being violated because the law effectively separates LGBTQ people as a class and says that they can’t access needed sexual health information that straight students are receiving.

Not only that, the law suggests “that there is something so undesirable, shameful, or controversial about ‘homosexuality’ that any positive portrayals of LGBTQ people or same-sex relationships must be explicitly barred.”

The lawsuit mentions how teachers in Arizona schools refuse to answer questions about safe sex, citing the law.

The lawsuit says that 80% of LGBTQ teens in Arizona regularly hear slurs like “faggot” and “dyke” at school, and 29% of LGB youth nationally have attempted suicide in the past year, according to the CDC. The lawsuit says those facts are exacerbated by the “inaccurate stereotypes” that the anti-LGBTQ curriculum law promotes.

“In 2019, it is shocking to see Arizona enforcing a law that openly disparages a group of students and requires them to be treated differently from all other students,” said NCLR Senior Staff Attorney Julie Wilensky.

“It is time for this harmful law to be eliminated from Arizona’s schools so all children can feel safe and valued.”

“Arizona is stigmatizing and demeaning LGBTQ students and preventing them from getting medically-accurate information that literally could save their lives,” said Puneet Cheema of Lambda Legal.

“They are breeding a school environment that is hostile to LGBTQ students and their relationships, and exposing LGBTQ students to harassment and abuse in classrooms, hallways, and locker rooms.”

The lawsuit names Arizona Superintendent of Public Instruction Kathy Hoffman as one of the defendants. Hoffman has already called for the anti-LGBTQ curriculum law to be repealed.

“This policy is not just outdated, it has always been harmful and wrong,” she said in February, calling for the law’s repeal.