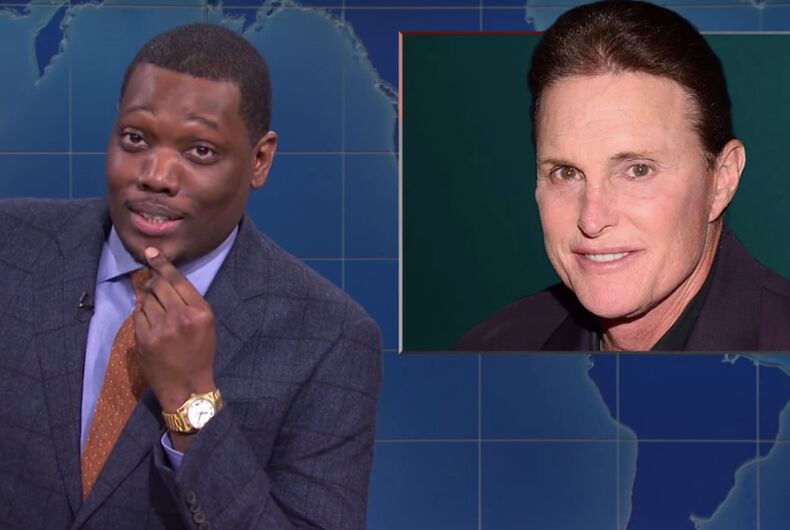 The joke bombed and was mostly met with silence and disapproval from the show’s live audience.

Related: Caitlyn Jenner donated $85k to trans charities. Is it enough to make up for supporting Trump?

During the segment, Che said:

“Rapper Kanye West has released his new gospel album Jesus Is King yesterday, and it’s also being reported that Kanye will be altering his old hits with more G-rated lyrics, so “Yay.”

At first, I thought Kanye was losing his mind and now I feel like he’s fine. He’s just turning into an old white lady. I mean, he used to be like one of the coolest black dudes on Earth. Now he’s showing up to events in sweatpants and orthopedic sneakers, listening to Kenny G and trying to get black people to like Trump. It’s like, “How long before this guy changes his name to Kathidy?”

Now you might think that I’m crazy, but about five years ago, there was a fella named [deadname] Jenner, and he moved to Calabasas [California].

The audience doesn’t laugh much. You can hear audience members saying, “Oooooh, no.” The bit has been widely panned by social media users who have called it “transphobic” and called for Che’s firing.

The joke was disrespectful and transphobic on several levels: foremost, it compares the deeply personal process of  transitioning gender to that of merely changing one’s own public appearance, as if one transitions for publicity.

Second, it deadnames Caitlyn Jenner. That is, it uses the name she was given at birth, an act considered offensive to many transgender people (the name is dead for a reason).

Here’s video of the “joke” bombing:

Want to cure loneliness? Leave everyone & everything you’ve ever known behind