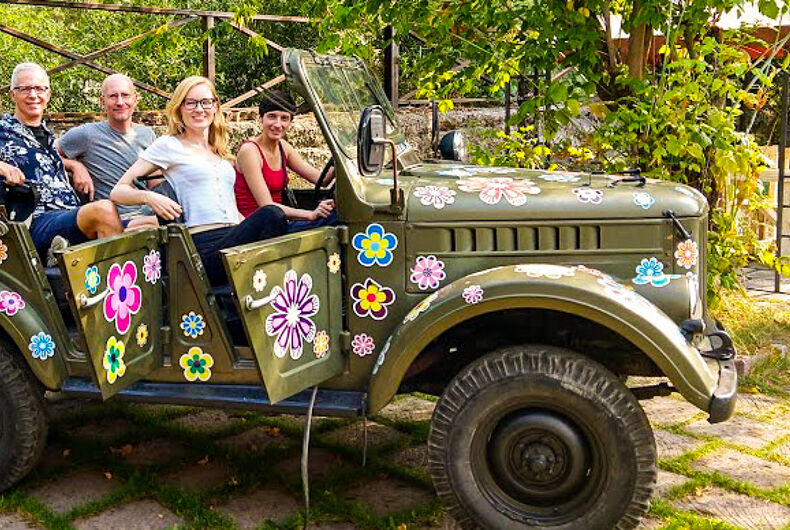 Visiting Armenia with Gillian and Casey. Instead of being lonely as digital nomads, we have more friends than ever.Photo: Michael Jensen

Three years ago, we lived in Seattle — a gay couple leading a fairly ordinary life. We had a circle of friends and family, but we often found ourselves feeling oddly lonely.

“Do we have any plans this weekend?” one of us would say.

Related: Coming out to a cab driver in a homophobic country

“Todd and Matt have to work,” the other would answer. “And Samantha and Lisa don’t want to drive up from Tacoma because of traffic.”

“I don’t know if I want to deal with the traffic myself. Why don’t we stay in this weekend?”

So we took a huge leap and left home to become “digital nomads,” which means we no longer have a permanent home. Instead, we work remotely while continuously traveling the world.

At the time, we worried we’d end up even more lonely. How would we ever meet people while being constantly on the move?

To our surprise, instead of being lonely, we now have the opposite problem: we’re more socially active now than we were back in our twenties.

How can this be?

It’s partly about America. We didn’t realize this until after we left, but in the United States, being busy is a sign of status. Everyone talks about how they want to be less stressed-out and overworked, and the importance work-life balance, but it’s mostly just talk. That’s because, in America, it’s “cool” to be over-extended. Or at least it was in Seattle in our social class.

This simply isn’t true in most of the rest of the world. People work hard in Europe and Southeast Asia. But they don’t work all the time.

Americans talk about work-life balance, but much of the rest of the world actually lives it, with cities that encourage socializing, and cultures where meals are leisurely — much more of a social event. The difference was stunning to us.

It also helped that as digital nomads, we frequently stay in “coliving” lodging facilities or work in “coworking” work spaces — shared places specifically designed with nomads in mind. So we see the same people every day. Many of these places make a point to plan social events: community meals, drinks on the beach, and so on.

And long-time travelers have a lot in common: they’re smart, tolerant, self-reliant, open-minded, and maybe also a little bit dorky. After all, you don’t leave home to travel the world if you didn’t feel at least a bit like a misfit back home.

In other words, our fellow nomads are a lot like us. Frankly, after spending most of our lives in America and never feeling like we quite fit in, it feels like we’ve finally found our tribe.

Plus, these people are away from their longtime friends and family too, so they’re open to meeting new people, just like we are.

It’s a little like summer camp: you form bonds quickly and with a surprising intensity.

We also meet plenty of locals — working at the places we patronize, or at bars or through friends. And most people are as interested in meeting travelers from America as we are in meeting them.

Much to our surprise, we’ve loved all this. We both considered ourselves introverts (and still do), and Michael had always thought of himself as a bit of a loner. But now we find ourselves going out night after night.

You might ask: how deep can our new friendship really be? Summer camp friendships form fast, but they break up fast too, when the camping session comes to an end.

But these friendships can still run surprisingly deep, in part because we’ve made a real effort to stay in touch on social media with our best digital nomad friends, and then meet up with them again in new locations.

Take our friend Gillian, who we met in the summer of 2018 while living in southern Italy. She was a twenty-four-year old Montanan who’d just spend two years working at an NGO in Croatia, helping women deal the long-term impacts of war and rape.

Despite our being more than twenty years older, the three of us got along famously. (Italy’s legendary two-hour lunches didn’t hurt, nor did the many bottles of wine we shared.)

We had lunches together, went to local hot springs every week, took a few overnight trips, and maybe, uh, shared a few more bottles of wine. It felt like we did more in a month with them then we did in a year with our friends in Seattle.

Since then, we’ve made a point to meet these folks in other cities, for weeks or even months at a time. And most of us are planning to rent a villa in Egypt in the spring of next year.

We’ve done the same thing with other groups of friends: meeting people in one country, hitting it off, then staying in touch online and rendezvousing in another city. We met one couple in Thailand, right after they had just started dating, met up with them again in Vietnam, and next year, we may be traveling to their wedding in Scotland.

We’re fully aware this all may sound cloying, or downright annoying. We hope it doesn’t read like we’re bragging about how incredibly popular we are right now — and how you can be popular too, if you listen to us.

Popular, we’ll help you be popular.
You’ll hang with the right cohorts, you’ll be good at sports!
Know the slang you’ve got to know!
So let’s start cause you’ve got an awfully long way to go…

The fact is, our life still isn’t perfect. By leaving Seattle, we gained a lot, but we had to give up some things too — namely, close contact with our Seattle friends and family. As hard as we try to stay in touch, it’s not the same now, even with frequent Skype calls. Life goes on.

Still, maybe we do have something to teach people. We were pretty lonely in America, even if we didn’t fully realize it. We think American culture itself is partly to blame, because it does an excellent job of making people feel anxious and alone.

We took dramatic action, and our lives changed: we’re not lonely anymore. Which means you might be able to change things about your life too.

That might not mean leaving everything behind to indefinitely travel the world (although we highly recommend it!)

But change is possible. We’re not the same people we were when we left Seattle two years ago.

Let’s face it: you probably came home from summer camp a little different too.

Ex-gays are going to D.C. to lobby against LGBTQ laws