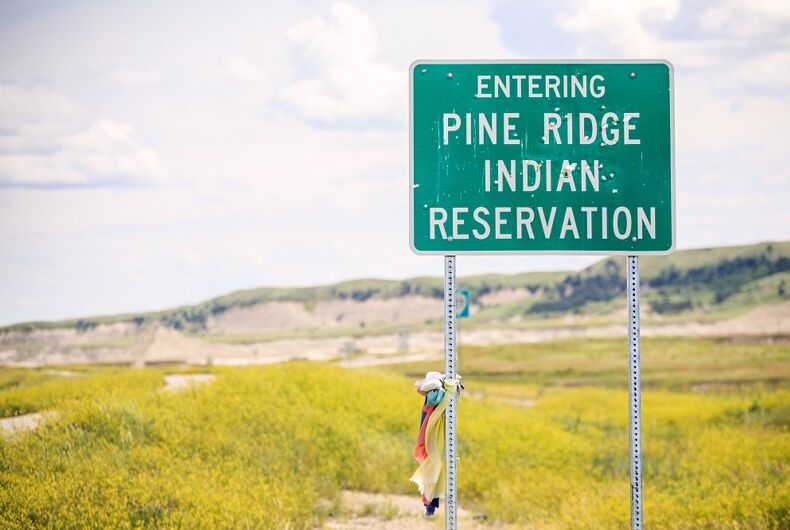 The law is modeled on federal hate crimes law and calls for the tribal government to collect data about hate crimes. It also allows hate crimes to be punished with one year of jail or a fine.

Monique Mousseau and Felipa DeLeon are a married couple and they worked to get the new ordinance passed. They said that they met with representatives from eight of the nine reservation districts to lobby for the ordinance and they were able to build a base of support.

“Although authorities haven’t been keeping data, we know that many suicides on the reservation are related to gay-bashing and shaming,” Mousseau said.

She said that she lost her job with the tribal police department in 2005 when she refused to end her relationship with DeLeon. She went home and found the word “faggot” written on her house.

“I tried to file a report with the police and they just laughed,” she recalled.

She also said that she and her wife experienced gay-bashing on the reservation first hand, so much that they moved away in 2009. And they’re not the only ones.

“LGBTQ folks and their families and friends on Pine Ridge often contact us for support and advice after their loved ones are attacked or commit suicide,” she said.

While there is no national database of reservation laws, Indian Country Today looked into it and couldn’t find another tribal government that included sexual orientation in its hate crimes ordinance.

The tribal council took public comment before making its decision, and the opposition to the hate crimes law was largely religious.

“This law is a mortal sin; it is ungodly and unnatural, an abomination before the lord our god,” said Vina White Face-Steele, who is a born-again Christian.

“We cried behind closed doors after Vina called us abominations,” Mousseau told Indian Country Today. “Many people spoke on our behalf the next day including straight men. That was the greatest feeling; it gave a heartbeat back to my heart.”

“These are historic days for our tribe, and for the rights of all people who seek equality, justice and recognition under the law,” said Chase Iron Eyes of the Lakota People’s Law Project.

While the Obergefell v. Hodges decision required each state to recognize marriage equality in 2015, it did not apply to tribal governments where the federal court system does not have jurisdiction.

This past July, the Oglala Sioux Tribal Council passed an ordinance allowing marriage for same-sex couples on a 12-3 vote.

The state of South Dakota – in which the Oglala Sioux’s reservation is located – does not have LGBTQ-inclusive hate crimes protections.