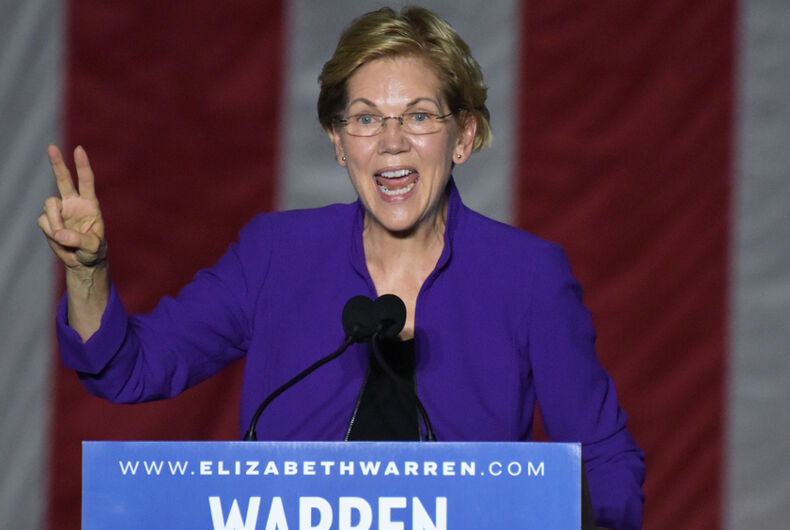 While surging in the polls, Elizabeth Warren has posted a video of her thanking a young gay supporter, Zach, for donating $3 to her campaign.

He’s so excited that he invites his boyfriend, Alex, to listen in as Warren pledges to continue fighting for the presidency.

In a video posted to Twitter (below), the Democratic presidential candidate begins the call by saying, “Hello, Zachary.”

“Umm… you gotta be kidding me,” he responds.

“Nope, not kidding,” she smiles.

“Oh my god, oh my god, this is so awesome!” he replies before asking, “Could you hold on one sec?”

He then grabs his boyfriend Alex to listen in on the call, and Warren greets him. She explains that she’s calling to thank Zach for contributing to her campaign.

“You are so welcome,” Zach says. “I’m more than happy to do that. I don’t have much money but, I’m 19. I work paycheck to paycheck but I thought it was, you know, something to believe in.”

“I know,” Warren says. “We’re gonna do this together,” she says before adding, “Alex, you’ve got a good guy here for a boyfriend.”

They then laugh and thank her again for her call, telling her, “You keep fighting.”

Warren responds, “I will. I will, and you stay in this fight. This is how we’re gonna win.”

Double woo-hoo thank you to Zachary from Ohio who donated $3 today! Zachary said he can’t afford to give a lot, but let me tell you Zach, your $3 make a difference. We can win in 2020, and it’s because of grassroots donors like you. pic.twitter.com/tQwx1Pgb7f

It’s a shrewd move. Not only does sharing the video signal Warren’s support for same-sex couples, but she’s also encouraging poorer donors to give what they can by showing her appreciation for even smaller amounts.

It’s unclear how much Warren has raised during her third quarter of fundraising as candidates have until October 15 to file their amounts with the Federal Election Commission. We do know that her competitors Bernie Sanders raised $25.3 million and gay candidate Pete Buttigieg raised $19.1 million.

Warren is currently polling at 23%, ahead of Sanders’ 17.8% but behind Biden’s 27.2%. Biden’s popularity has gradually been decreasing and Warren’s has gradually been increasing, suggesting a possible showdown between the two candidates late into the primary.