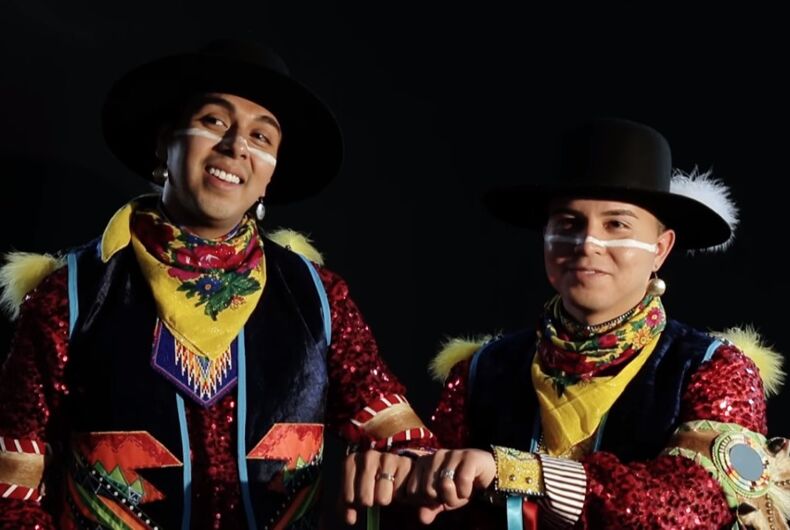 Adrian Stevens and Sean Snyder are a Native American same-sex couple who met eight years ago on the pow wow dance circuit, and are now making waves and breaking down barrier by performing together.

The events, which feature music, dance, and other celebrations of their culture, have deep roots in their families and tribes.

“Our parents danced, it’s something we’ve always known,” Stevens, 29, told People. “It’s been a part of our families’ lives, and it’s one of the things that brought us together. Not only competitively, but spiritually and physically.”

“This arena has so much love. It brought us together,” said Stevens, who proposed to Snyder at the Eiffel Tower in Paris, France.

Still, Stevens and Snyder, 25, weren’t sure how they would be received if they danced together as a couple during the “Sweetheart’s Special” dances that are often part of the pow wows. They waited a few years before trying it.

“At the time, we were really nervous, we even hesitated and waited for the song to start before stepping onto the dance floor,” Stevens says. “Pow wows are not normally something people do as a same-sex couple.”

They quickly got a routine together and performed, and the response was positive.

“It was great. The way it was perceived, it was phenomenal. It was almost overwhelming,” Stevens said.

It hasn’t been all smooth sailing, however, as the couple were disqualified for not being an opposite gender couple at one pow wow, and have said that they have experienced some homophobia from members of the older generations.

“There are quite a few two-spirit couples, but there’s definitely a generational gap, and there’s a variation about how they present themselves and want to be represented,” Stevens said. “For us, being that younger generation and the next generation, we have a duty—and with a high suicide rate among Native American youth—a lot of those suicides are related to them being members of the LGBT community.”

Two-spirit is a modern term used to describe Native American people who hold a “third gender” status in the community. While it is often used to describe gay or transgender people, the term is not so much about sexuality or how one personally identifies; it is a spiritual and ceremonial role recognized and confirmed by the Elders of the community.

The couple said the discrimination just pushes them to continue what they are doing, in order to help make a positive change.

“We don’t just do this for ourselves, it’s for the youth that may still be finding their identity and what feels right and comfortable to them,” Stevens said.

“This arena, it doesn’t belong to anybody, it’s for all of us,” he added.

“Us going out there, and being in the public eye and putting ourselves in that spotlight, we definitely want to give people the support and encouragement that, yeah, look, we’re out here doing it and we’re living our lives. We’re happy. There’s so much love in this arena, and there’s so much love on the outside, that we’re going to do this no matter what anybody may think.”

Watch the couple dancing and talking about the importance of their performances in the video below.