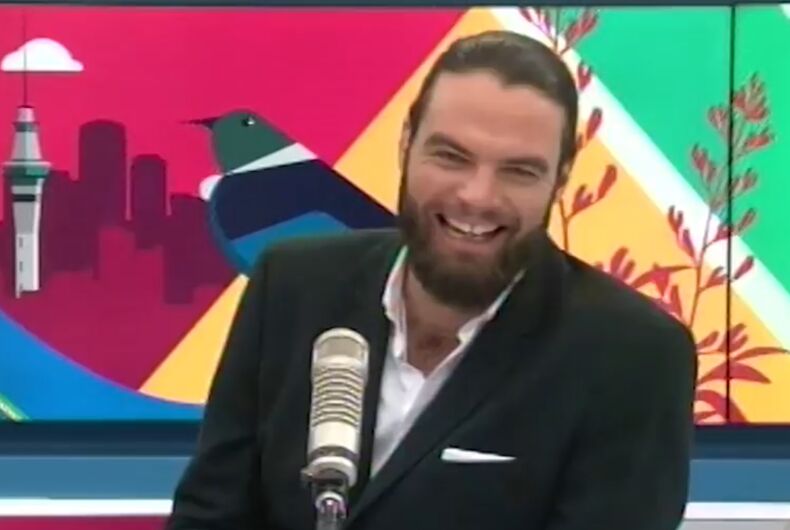 Whoops. Morning show host Ryan Bridge was accidentally outed on air by his co-host Mark Richardson during New Zealand’s The AM Show broadcast. The two men are friends and while Bridge isn’t closeted, he wasn’t out on air.

During a conversation about collecting things, Bridge was asked if he collected anything. Without thinking, Richardson quipped “ex-boyfriends.”

Related: A lesbian employee was outed in a meeting & fired for complaining about it

After an awkward moment, Bridge replied, “Yes, it’s true, I’m gay. There we go, it’s out there.”

“If you caught what was said before,” he said later in the show, “it’s not something I’ve tried to hide, it’s something all my friends and family have known about for a very long time. The reason I haven’t chosen to share it with you at home, with listeners on my radio show is just that, I don’t know, it’s not that interesting really, is it?”

“It’s just my private business and my life and not something I have necessarily tried to hide but it’s just not something that I’ve bothered or cared to share with the world, with you at home, but it’s out there, so that is that,” he continued.

“Thank you very much to the people who have been getting in touch in the last few minutes. It’s quite heartening. I wanted to say that Mark didn’t do this on purpose. It wasn’t like he was being mean, or he was trying to get me to say something I didn’t want to say. it was an innocent, honest mistake.”

A mortified Richardson realized his mistake and immediately apologized, saying, “In three years of doing this job, this is as bad as I’ve ever felt. I say a lot of stuff on this show, and I mean it, and some of it walks the line. I just want to say I’m sorry. It’s because obviously I love you so much as a person. Just me being a smartass and trying to poke fun at you for a comedic moment on the show has led to this, and I’m dreadfully sorry.”

“These things happen. It’s live television,” Bridge told Richardson, telling him there’s “nothing to be sorry about.”