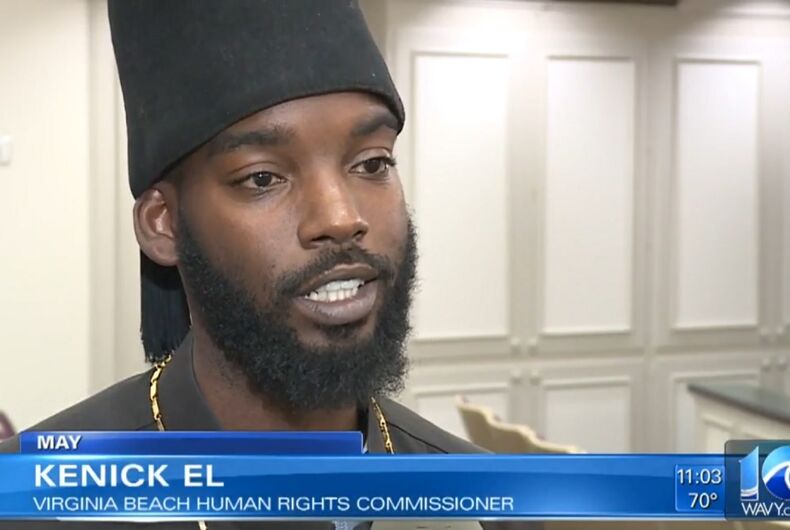 A human rights commissioner in Virginia says that he won’t be giving up his position even after he posted hateful messages about LGBTQ people to social media – and his fellow members won’t be pushing him out.

Kenick El is on the Virginia Beach Human Rights Commission (VBHRC). On Facebook, he posted a link to a Fox News article about a transgender woman who was convicted of sexual assault on a minor.

“This is why we need to stop giving men in dresses passes,” El wrote, referring to a woman who may or may not have been wearing a dress at the time.

“I have daughters and I won’t accept them sharing a restroom with a grown man suffering from this mental illness. Men trying to be women and women trying to be men is really confusing our children and I’m tired of seeing this nonsense promoted to our children.”

VBHRC chair Sylvia Nery-Strickland issued a statement defending El. She wrote that he “does not speak on behalf of the VBHFC.”

“The HRC is a very diverse group of individuals who come together for the common good and equality for all,” she said, even though she was addressing a situation where a VBHRC member does not believe in equality for all. “I personally do not agree with the postings and other commissioners have contacted me and they do not agree as well, but rather support and value our fellow LGBT commissioners, family members, friends and supporters.”

The Fox article – which was was determined to be a “mixture” of false and true statements by the fact-checking website Snopes – has been getting attention on rightwing websites because the sexual assault occurred in a bathroom. What they aren’t always mentioning, though, is that it allegedly occurred in a bathroom in a private residence, not a public women’s restroom and has nothing to do with trans-inclusive legislation.

The article was not the only time he addressed LGBTQ people on his Facebook page. In separate posts, he wrote, “Homosexuality is a mental illness and should be treated as such,” and “Homosexuality is an abomination to the Human Race and it corrupts the hermetic principle of gender by interfering with the laws of nature just to gratify the lower self.”

El told 13News Now that he “loves everyone” but felt it was “very important for me just to express my views on my page in a very sincere, polite manner.”

He did not explain how calling people an “abomination” or misgendering people is “polite.”

The LGBT Life Center in Virginia Beach wants him removed from the Human Rights Commission.

“Disregard and contempt for the dignity of all humans is counter to the mission of VBHRC, and LGBT Life Center does not believe the commission, or the commissioner, can legitimately claim to respect and safeguard all Virginia Beach citizens when a vulnerable minority population is declared to be mentally ill, an abomination, and subjected to prejudicial stereotypes,” the Center wrote in a letter.

“We believe that the statements and opinions expressed by Commissioner El, personal or not, if left unchecked without consequence, will contribute to and foster a climate of folks in our LGBT+ community feeling unsafe and unable to trust in our elected and appointed leaders,” the Hampton Roads LGBTQAI Interfaith Group wrote in a letter to Virginia Beach Mayor Bobby Dyer.

Several other organizations, including PFLAG, asked for him to be removed.

The VBHRC is an advisory commission that does not have the power to pass policy on its own.