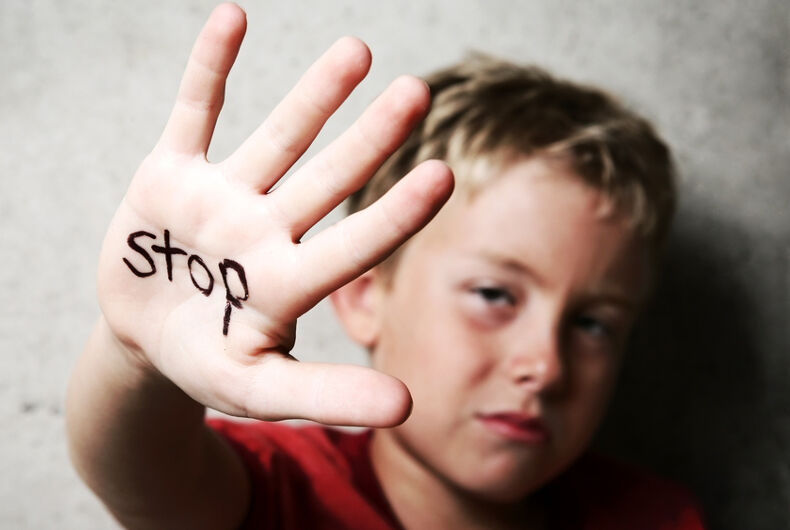 This is not the child in question.Photo: Photo Illustration via Shutterstock

A Scottish man named Craig Stodden is facing “serious punishment” after he struck a nine-year-old boy in the chest last Dec. 7. Stodden then cursed the child out and then told him to go stand outside in the rain, all for being “a gayboy.”

According to prosecutor Vicky McMillan, “[Stodden] shouted at the boy ‘get the f*ck out of here’. This caused the boy to cry. The accused bent down to him and shouted ‘Why the f*ck are you crying?’ and then struck him to the chest.”

Related: Jeffrey Epstein tried to justify his sexual abuse of girls by saying it was the same as being gay

After the blow caused the boy to fall onto the floor, his mother entered the room and told Stodden to leave the child alone. Stodden then allegedly called the boy “a p*ssy,” a “gayboy” and “a homosexual” and then told the kid, “Get the f**k out I don’t want you in this house anymore,” effectively sending the child outside of his own home to stand along in the heavy rain without wearing shoes or a jacket.

Some passers-by in a car saw the child and then invited him to take shelter in their car. At this point, Stodden went outside and, not seeing the child, asked the car’s driver if they had seen the boy — Stodden apparently didn’t see the child in the car’s backseat. After the driver asked the boy if he knew Stodden, the boy cleverly said no.  The driver then took the boy to the local police station.

When the child’s mother later called the police to report her son as missing, police informed her that he was at the station. Stodden was later arrested when authorities at the hospital saw that his punch to the child’s chest had resulted in serious bruising.

“I was just thinking there must have been a very good reason for you to behave like this, but I can’t think of any reason why you would say that to this boy. The impact on that young boy will probably be lifelong. I’m glad I’m not sentencing you today. I’m glad I will have three weeks to reflect.”