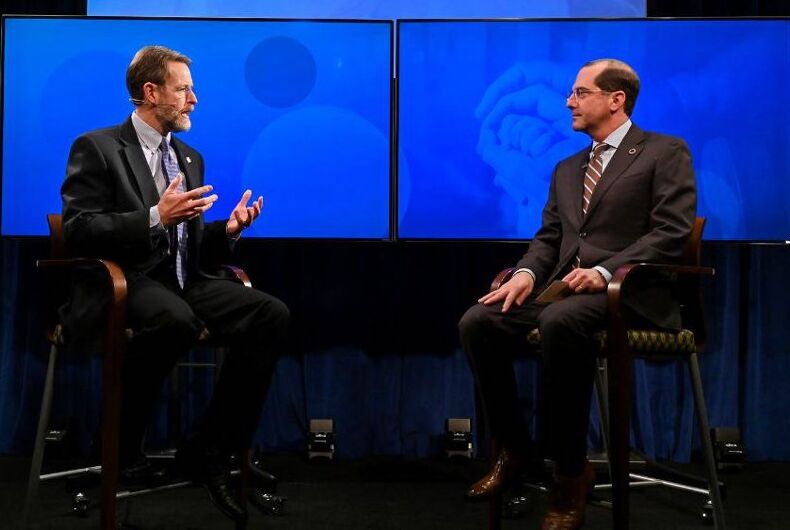 As head of the Department of Health and Human Services (HHS) Alex Azar is the federal official in charge of making President Trump’s pledge to eradicate HIV by 2030 a reality. So how is he going about this daunting task?

By sucking up to the religious right.

Azar, a former pharmaceutical executive, is one of the featured speakers at the Values Voters Summit, an annual jamboree of right-wing figures that the Southern Poverty Law Center (SPLC) describes as “a festival of bigotry and hate.” In fact, the event is sponsored by the Family Research Council, the notorious anti-LGBTQ outfit that SPLC has designated a hate group.

Azar appeared on a plenary session panel that was scheduled to include the follow luminaries:

If this doesn’t exactly sound like the kind of crowd who would be clamoring for outreach to populations at high risk for HIV, like gay men and especially gay men of color, well, you’re right.

None of Azar’s pals on the plenary are going to be advocating for safer sex interventions in vulnerable groups. Indeed, when he was in the Reagan administration, Gary Bauer pressured then-Surgeon General Everett Koop to say that condoms don’t prevent HIV transmission. (Koop refused.)

Azar’s friendliness with religious right leaders who have made their living by going after LGBTQ rights underscores just how hollow his (and Trump’s) promise to end HIV is. For one, it’s hindered by the administration’s staunch opposition to expanding health care, which would help lots of people with HIV or at risk of infection getting the treatment they need.

But more to the point, many of the people driving Trump policy are openly inimical to anything that helps LGBTQ people. Azar may not be among them, but that doesn’t matter. He’s willing to play ball with them, which confirms they have sway within the administration.

Nor was Azar’s appearance at the Value Voters Summit a fluke. He sat down for a friendly interview with FRC president Tony Perkins earlier this year.

Azar can make all the right noises in other settings, but appearing before a hate group undercuts the very policy he’s supposed to be implementing.