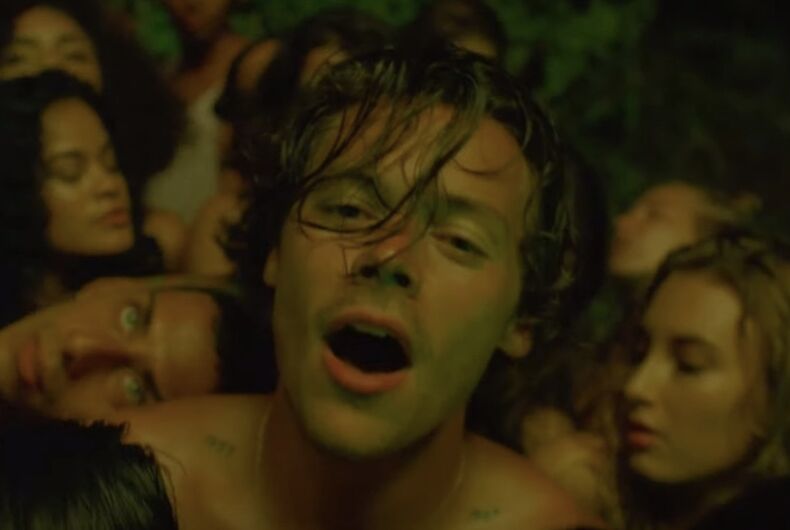 Harry Styles, the musician who was once with the Brit boy band One Direction, just released the music video for his song “Lights Up.” Fans are hailing it as a bisexual anthem for its depiction of Styles being loved on by men and women and for its lyrics also about knowing yourself, changing and letting your true self shine bright.

Style, who has said that he “never felt the need to really” define his sexuality, has nonetheless been an outspoken LGBTQ ally. His new video will cement his ally status and also reignite speculation over his own sexuality.

Though the song’s ambiguous lyrics aren’t explicitly queer and don’t really mention sex or gender, part of them are as follows:

What do you mean?
I’m sorry by the way
Never coming back down
Can’t you see?
I could, but wouldn’t stay….

Twitter commenters have praised Styles for releasing “a bisexual anthem.” One outlet notes that his unreleased 2018 song “Medicine” included the lines “The boys and the girls are here/ I mess around with him/ And I’m OK with it.”

Here’s the video for “Lights Up”:

During Pride month 2018, Styles waved a “Make America Gay Again” flag onstage at his Philadelphia concert to the approval of cheering fans. When he kicked off his tour in San Francisco in September 2017, he tied a Pride flag onto his microphone after a fan threw it on stage. In July 2018, he helped a fan come out to her mother during a live show.

Styles’ sexuality and that of his former One Direction bandmates have been the source of endless speculation and media fascination. Most recently, the HBO teen drama Euphoria included an animated fantasy sequence in which a young girl imagines a backstage tryst between Styles and Louis Tomlinson — Tomlinson said he didn’t know about the scene and wasn’t contacted about it before it aired.