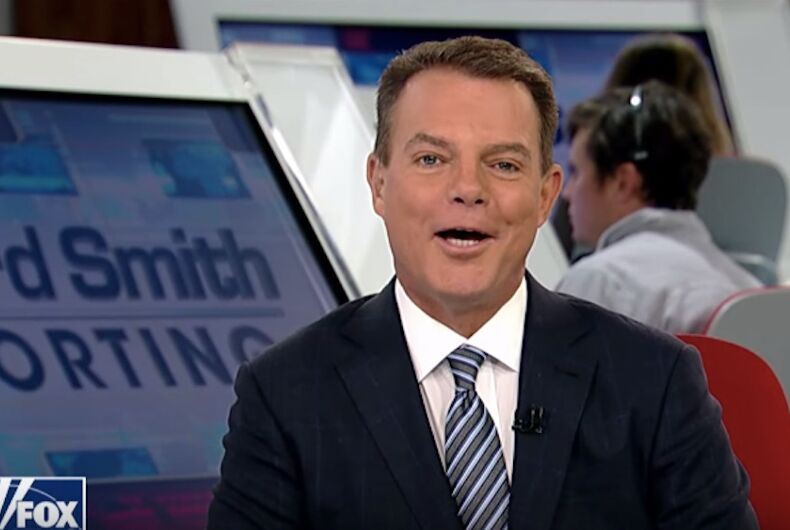 Shepard Smith, the gay FOX News anchor who sometimes criticized President Trump, will be leaving the network immediately. He made the announcement at the end of his Friday show.

Smith said he won’t be working for another news outlet anytime in the near future elsewhere, but the suddenness of his departure has caused speculation about his reasons for leaving his employer of 23 years.

In his goodbye statement (video below), Smith said:

“Recently I asked the company to allow me to leave Fox News and begin a new chapter. After requesting that I stay, they graciously obliged. The opportunities afforded this guy from small town Mississippi have been many. It’s been an honor and a privilege to report the news each day to our loyal audience in context and with perspective, without fear or favor. I’ve worked with the most talented, dedicated and focused professionals I know and I’m proud to have anchored their work each day — I will deeply miss them.”

…Court Justice & I turned him down (he’s been terrible ever since), Shep Smith, @donnabrazile (who gave Crooked Hillary the debate questions & got fired from @CNN), & others, @FoxNews doesn’t deliver for US anymore. It is so different than it used to be. Oh well, I’m President!

The news seems to have surprised and shaken some of his co-workers:

The Washington Post points out that Smith was often at odds with the network’s pro-Trump bent, and that recent spats with the networks other conservative pundits may have been behind his departure:

“He has also taken on Fox’s own pro-Trump personalities. Earlier this month, he engaged in an extraordinary war of words with Tucker Carlson, one of the Fox’s most popular hosts. Smith called Carlson “repugnant” for not defending Fox legal analyst Andrew Napolitano when a guest on Carlson’s program called Napolitano “a fool” for critical comments about Trump’s efforts to gain damaging information on Democratic rival Joe Biden from the president of Ukraine.

A former Fox staffer who has recently been in touch with Smith said that the spat with Carlson was a last straw, and that Smith had grown frustrated in recent months by the repeated attacks on the news division by other opinion hosts. Fox declined comment; Smith was not available for an interview.”

Here’s video of his announcement: