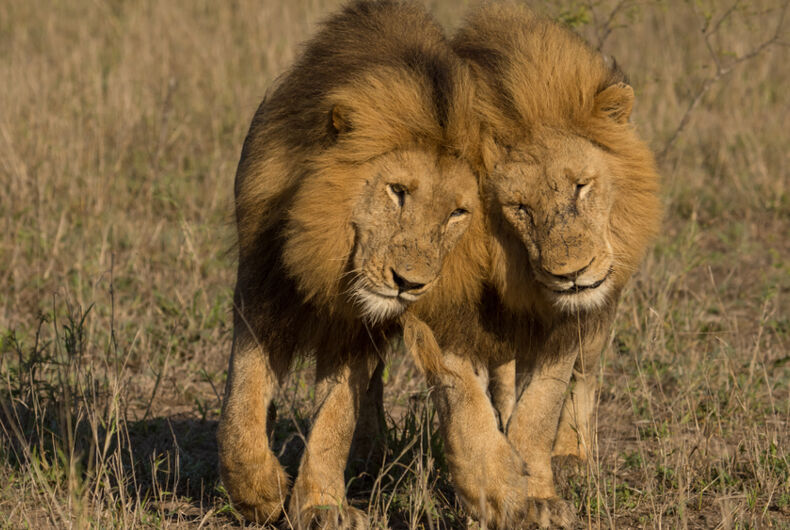 A video of what seems to be two male lions mating has gone viral with over a million views, reminding us that same-sex relationships are entirely natural — in fact, they occur in nature all the time.

In the video (below), one male lion mounts another and maintains the sexual posture until an inquisitive lioness interrupts, trying to nuzzle with the receptive male until the first lion chases her off.

The viewers in the video can be heard giggling at first and then gasping, though it’s unclear when and where the video was shot.

Now this is some tea here. 🥴🤧
Sis pulled up to the scene w/ questions. pic.twitter.com/ILXLf5QsbL

As Out.com points out, it’s entirely possible that the lions could actually be female as some female lions have manes.

“Experts have said sometimes male lions mount one another as a type of bonding within the pack and don’t do so in a sexual way,” Out reports, adding that when male lions bond in this non-sexual way, there is frottage and nuzzling, but none of the yowling or climax that accompanies actual mating.

Headlines make it seem as if penguins are the animals that most often exhibit same-sex attraction, but over 1,500 animal species have been documented exhibiting homosexual behaviors.

In his 1999 book Biological Exuberance, Canadian biologist Bruce Bagemihl’s said that animals exhibit “much greater sexual diversity — including homosexual, bisexual and non-reproductive sex — than the scientific community and society at large have previously been willing to accept.” He then documented same-sex activity in over 450 animal species including creatures in every major animal group and every major geographic region around the world. Since then, over 1,500 animal species have been documented as exhibiting homosexual behaviors.

Our sister site Queerty once took a look at same-sex animal behaviors, including Japanese macaques, flour beetles and domestic sheep.

And as we’ve said in the past, “Only one animal exhibits homophobia — humans. Who’s unnatural now?”

Which Democratic presidential candidates will drop out next?