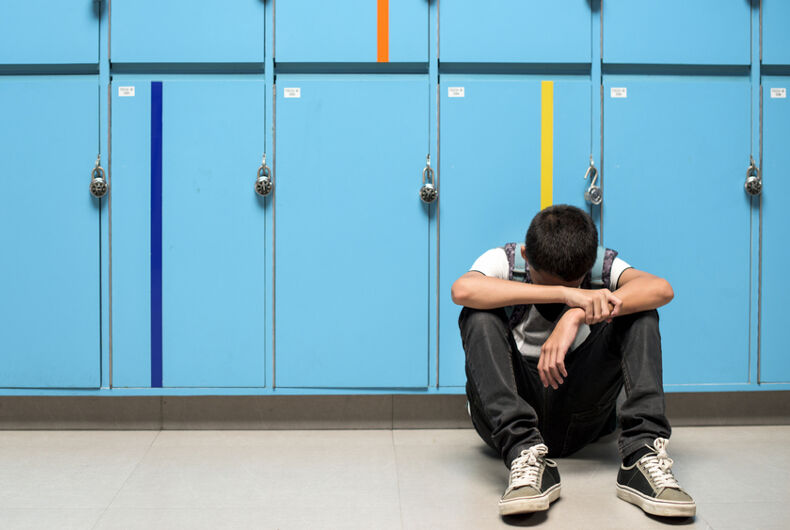 Editor’s note: This article originally included a photo taken from FFA.org of students who were not involved with this incident. The image has since been replaced with apologies to those pictured.

Students in Bakersfield, California — a city of 380,000 110 miles north of Los Angeles — were attending the first meeting of Frontier High School’s Gay-Straight Alliance when students members of the Future Farmers of America club (FFA) confronted them holding “MAGA flags.” Some male and female FFA members held hands and yelled, “This is what’s right.”

The incident came to light after a concerned parent shared the story on social media. The parent wrote:

“Today I’m joining other angry parents of LGBT kids to see that something is done. My son says lately the tension at that school between FFA and any kids they’ve determined as “liberal.” The gay community there is apparently the one they’ve decided to mess with. Not my kid and his friends. I will not go down without a fight. I want these kids punished. So I’m hoping to pack away the chola that lives inside me and act like a reasonable 38-year-old but this is my kid.

The Kern High School District responded with the following statement:

“The Kern High School District and Frontier High School recognize that students have varying viewpoints and opinions. One of the goals of the educational process is to teach students how to communicate respectfully. The reported incident that occurred on Wednesday afternoon at Frontier High School is currently being investigated. Once the investigation is complete, appropriate follow-up measures will be taken.”

The FFA is national nonprofit organization to promote agricultural education among young people. It’s unclear if the students had coordinated their opposition to the gay-straight alliance as an FFA activity or if they acted independently.

A 2014 study from the University of British Columbia found that “students in Canadian schools with gay-straight alliances were less likely to be discriminated against, had lower odds of suicidal thoughts and had fewer suicide attempts — regardless of whether they were gay or straight,” according to Smithsonian.com.

This video of male lions mating has gone viral, reminding us that being gay is natural