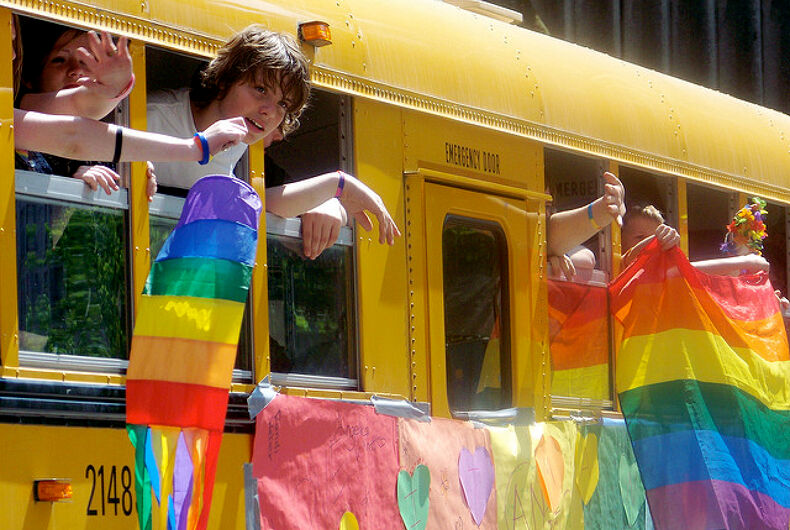 The ACLU of Indiana is suing a school, saying that the school has been discriminating against the school’s gay-straight alliance.

According to the lawsuit, students at Leo Jr. Sr. High School formed a GSA, but they’ve been forced to follow rules that other student clubs don’t have to follow.

The problem started when the group was formed two years ago – the principal said that they couldn’t call themselves “Leo GSA” because the “g” stands for “gay.”

“If you have to start that whole process off by not even being able to identify yourself with the name that would put you in line with the thousands of other GSAs across the country, you can see, right off the bat, you’re being told that in some way, there is something that needs to be suppressed in who you are,” said Ken Falk of the ACLU of Indiana.

“That’s the complete opposite of the message that a GSA is designed to give.”

Instead, they have to call themselves the “Leo Pride Alliance,” and they had to agree that “Pride” is just an acronym for “Professionalism, Respect, Integrity, Diligence, and Excellence” and has nothing to do with LGBTQ Pride.

They also can’t use words like “gay” and “lesbian” when they’re promoting the group.

Worst of all, the principal requires them to maintain a list of all their members, which is then sent to all the teachers in the school. Since a lot of these students aren’t ready to be outed so publicly, they have stopped attending meetings.

The ACLU of Indiana’s complaint says that the school is in violation of the Equal Access Act, a law that was signed by Ronald Reagan in 1984 and was originally pushed by Christian conservatives who were worried that schools would ban Bible clubs.

They also say that the students’ First and Fourteenth Amendment rights were violated.

A school district spokesperson wouldn’t comment on the lawsuit specifically but told The Daily Beast: “We take the rights of our students seriously. We are looking into this matter.”

This is the fourth time the ACLU of Indiana has stepped in to defend a GSA.

Republicans found an easy way around their midterm losses: cheat