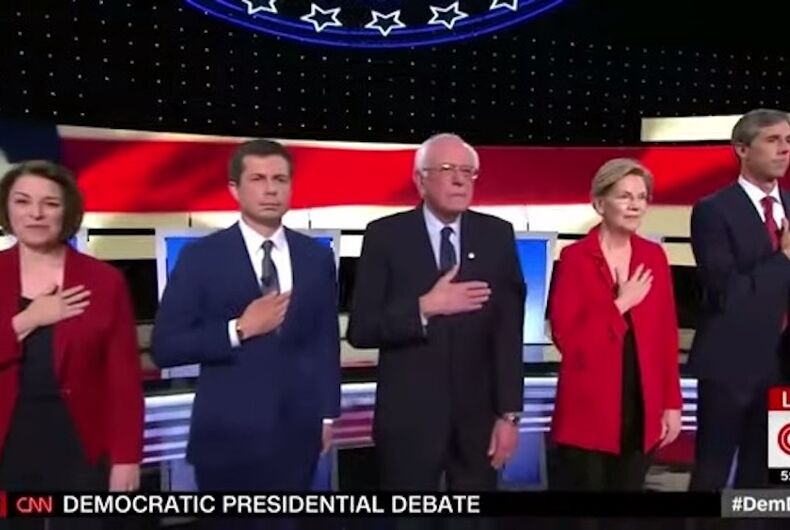 Call it the Great Winnowing.

After months of a Democratic presidential field that had about as many players as a football game, we’re finally starting to see some candidates come to terms with reality. In just the last two weeks, Sen. Kirsten Gillibrand, Washington Gov. Jay Inslee, Rep. Seth Moulton and former Colorado Gov. John Hickenlooper have all called it quits.

None of these candidates’ campaigns ever took off, and in the case of Hickenlooper, it may have actually harmed his image and current Senate run. On the other hand, Inslee got much attention and kudos for his focus on climate change after he withdrew, much more than he received during his campaign.

The winnowing leaves the field down to a still ridiculous number of 20. By comparison, the 2106 Republican field that yielded Donald Trump as the nominee had about 13 to start.

Driving the withdrawals are the standards set for getting into the televised debates. The Democratic National Committee is starting to raise the bar, which is still set pretty low. Only 10 candidates made the cut this time.

Some candidates will soldier on because they have the money and want to make a point. But it’s now unlikely that we will ever again have the dubious pleasure of hearing Marianne Williamson address foreign policy questions.

But the race is quickly shaping up into a race between just six major candidates. Joe Biden, Bernie Sanders and Elizabeth Warren are the current frontrunners, based on the polls. The second tier includes Kamala Harris, Pete Buttigieg and Cory Booker. Barely hanging on are Amy Klobuchar, Julian Castro and Beto O’Rourke. Everyone else, including Williamson and Andrew Yang, are essentially footnotes.

In fact, the second tier is a lot closer to the hangers on than it is to the top tier. Harris is the best situated of the three second-tier candidates, as she has seen her support spike at various times before drifting back, a sign that voters may consider her a good second choice if their preferred candidate flops. But in the most recent Monmouth Poll, Buttigieg and Booker are tied at a paltry four percent.

Buttigieg in particular is in a precarious spot right now. After months of glowing coverage, his momentum has pretty much ground to a halt. His poll numbers have slipped, and the press is beginning to question whether he can overcome the controversy that arose from a white officer shooting a black man in Buttigieg’s South Bend.

“Criticism of Mr. Buttigieg’s oversight of the police has damaged his viability as a Democratic presidential candidate, given the huge influence of black voters in choosing the party’s nominee,” The New York Times reported last week.

Buttigieg is sitting on a giant pot of money, so he will be around until the voting starts in Iowa and New Hampshire next February. The same can’t be said of some of his competitors. The first voting is still six months away, a lifetime in politics, but sometimes things don’t change all that much, even in a lifetime.

This video of male lions mating has gone viral, reminding us that being gay is natural