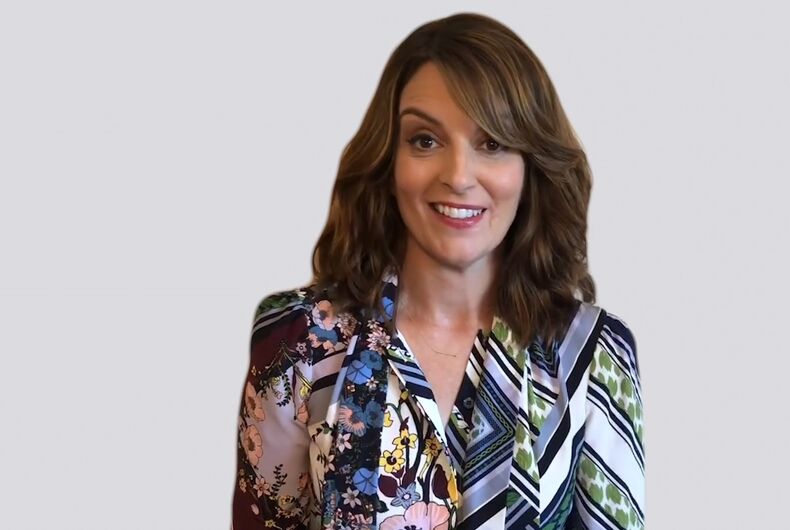 The University of Virginia (UVA) put out a video featuring Tina Fey asking their students to not be so homophobic at football games.

At issue is the school’s fight song, “The Good Old Song,” which was written in the late 1800’s.

The song has a line that goes: “We come from old Virginia where all is bright and gay.”

In the 1970’s – just as the “homosexual” meaning of the word “gay” was becoming common knowledge for straight people – students substituted “not gay” for the word “gay” in the song.

“That, obviously, is not only not politically incorrect, its heinous and pretty divisive,” one student says in a video released by the university’s administration.

“I just had an amazing idea: stop doing that,” says actress and screenwriter Tina Fey, who graduated from the University of Virginia in 1992 with a BA in drama.

He says that’s “slightly better,” and others in the video say that that’s not acceptable because they want students to behave with “class.”

LGBTQ students have been fighting against the “not gay” lyrics for at least a decade.

An article that was published on Outsports before 2003 highlighted the LGBT Union’s attempt to get people to stop singing “not gay.”

“The idea that people could be so ignorant – I just couldn’t understand it,” said a sophomore quoted in the article.

He and other students were trying to get student athletes to sign a petition against the “not gay” lyrics, but were having a hard time getting people to take them seriously.

Now some people commenting on the Instagram post of the video say that they’ve never heard the “not gay” line at games, a sign that it’s less common than before.