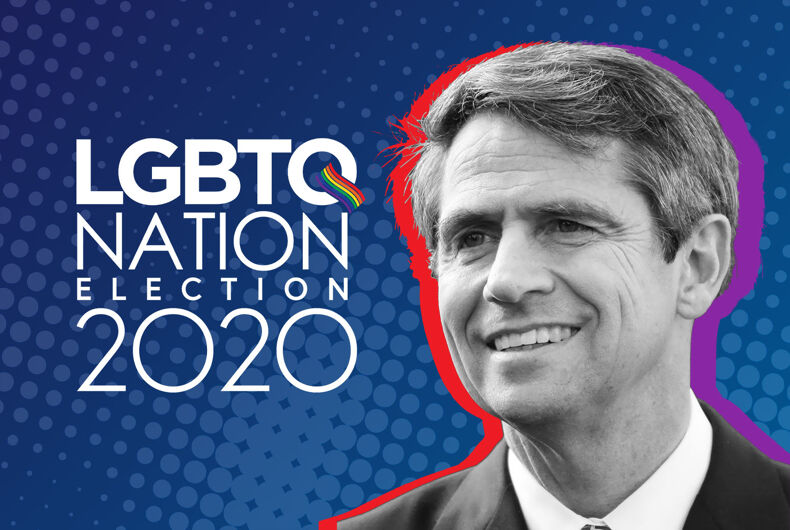 LGBTQ Nation’s coverage of the 2020 U.S. Presidential Election includes interviews and perspectives highlighting the stakes and important issues facing the next President of the United States.

You’re not alone if you have never heard of Joe Sestak.

While other presidential hopefuls already were deep into the media rotation and campaign rallies by early 2019, the 67-year-old retired Congressman Sestak was at his home in Springfield, Pennsylvania supporting his daughter Alexandra as she fought through her second bout of brain cancer.

It wasn’t until late June, when doctors gave her the all-clear, that Sestak announced his run for the Democratic nomination in a video posted on his website.

As Sestak gears up for the primary, he’s working to overcome challenges brought on by his delayed entry to the race. He hasn’t qualified for any of the televised democratic debates and lacks the recognition enjoyed by other candidates to register in polls.

Sestak acknowledges he has a mountain of challenges in front of him but says that his vision for the future of the country continues to propel him forward. At the least, he could end up on the shortlist of vice presidential candidates and cabinet posts.

Sestak’s background certainly positions him well to take on Trump and the GOP that is his enabler. Not only did he serve 31 years in the Navy, where and rose to the rank of 3-star Admiral, but Sestak retired from the Navy after his daughter’s first bout of cancer and ran for Congress. In securing his seat, the first-time Democratic candidate dethroned a 10-time Republican incumbent in a nearly 2:1 Republican district and a swing state that Trump won narrowly in 2016.

That Sestak hope to make LGBTQ equality and “fighting all injustice” central to his campaign is certainly a plus.

LGBTQ Nation caught up with the candidate for an exclusive chat to explore his vision for America.

You’ve been a big supporter of civil rights, including LGBTQ equality. As a cisgender, heterosexual, white man why have you chosen to focus on supporting members of our society who hold less privilege than you do?

JS: I hate injustice. I abhor it and I get mad at it. I went to war with so many people and it bothers me to come home with them and see that [some of them] don’t have equality back here. But I have a second reason, I want the best of the best. I want everyone involved so I can get the best of the best: women, men, African-Americans, Hispanic, LGBT, all of them. You name it, I want it.

Our common mission will go better if I have the best of the best. I wish people would understand that equality gives us the opportunity to get everybody [together]. We should support the best from all of the demographics, not just have a bunch of white guys. I think the Democratic Party should be saying that even more.

As president, how would you combat President Trump’s racist and anti-immigrant rhetoric and the violence it has unleashed?

What we need in a president is someone who uses language to unite, never to divide. However, that doesn’t mean that we don’t call out those who are not living in accordance with American values, like white supremacists. The president has the onus of speaking up when he sees something like that. The president, as the captain of the ship, sets the tone and the crew usually follows that tone.

I was on the first ship that had women on board as combatants. If I had said, ‘Wink, wink, there are women coming aboard, what do you think of that?’ the whole tone would have been different from the one created by simply treating them with respect and equality.

We’ve seen reversals of and threats to many minority rights under the guise of religious freedom during this administration. Would you roll back this trend?

I will oppose any discriminatory religious freedom. These actions really hurt the LGBT community, which you well know, and those things just need to be changed. We need to get the Equality Act passed in Congress because then we can’t have another president who undoes it with executive orders.

I really want to earn the trust of the American people so that I can do this by law so that your rights can’t be ripped up. In the last two years of Obama’s administration, he issued many executive orders and Trump just ripped them up.

One of the biggest issues facing the LGBTQ community is the ridiculously high murder rate for trans black women. It’s to the point where their average life expectancy is 30-35 years. How would you respond to the hate and violence that is threatening this community right now?

First off, I’m going to fight that darn hard because that’s the power of the presidency. I’m going to fight for justice, accountability, etc. I will also be hiring people. Whoever you are, I’m going to make sure you’re good! There are always good people in every community and that’s what I learned in the military.

The other way I’ll be helping is I’ll be going to visit. For example, I went to Philadelphia because I heard that the suicide of LGBT youth was very high compared to the adults there. So I went in and I visited with the youth there. I mean that’s small, but it matters.

What would you say to detractors who look at all the work you’re doing with minorities and then accuse you of having a white savior complex?

Look, I don’t understand that. I do this because I was in the Navy and I looked at every minority as though they were equal. And when I’m out here and I see injustice towards those I served with: And so how can I not do it? You know, all of these servicemembers people, they did things for me and I owe them. It was out there on that ship that they had my back and I have their back. And besides, it’s justice. We are a nation of laws, and if the laws aren’t working right we fix them.

And they’re usually not working right for minority groups.