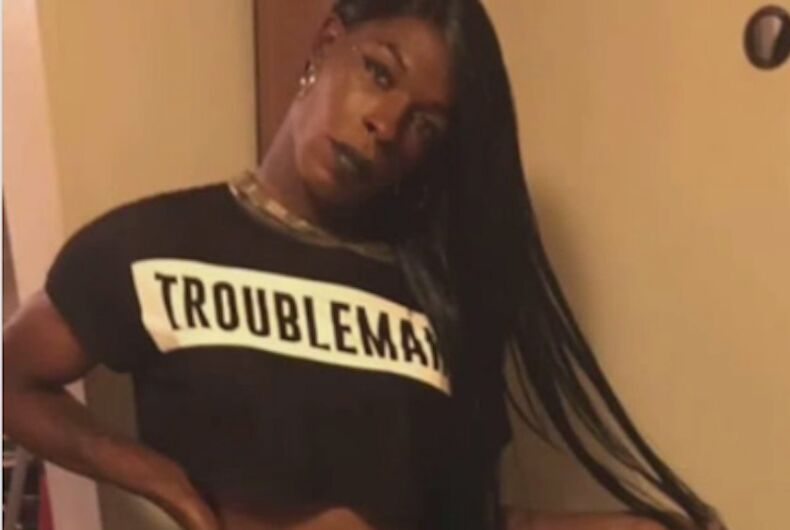 In Kansas City, Kansas, a trans woman named Ja’leyah-Jamar was shot to death, making her the 19th trans person in the U.S. to have been killed this year. She was the parent of a five-year-old daughter named Ja’Mya and also leaves behind seven other siblings.

Kansas City police are seeking an unnamed man who once dated Jamar as a person of interest in her murder.

On September 13, Kansas City Kansas Police Department (KCKPD) officers responded to a reported shooting in the northeastern part of the city. They found Ja’leyah-Jamar and transported her to a hospital where she later died of her injuries.

In their report, police initially misgendered Ja’leyah-Jamar, as did many media outlets.

The KCKPD has since released a photo of the man and two photos of a car, a 2006 Pontiac G6 with Kansas license plate number 038 LXW.

“Ja’leyah was murder because she wanted to feel the feeling of living a normal life with a house, the cars, a daughter and a man to make her feel secure… Ja’leyah-Jamar didn’t ask for this life… No one can control WHO they love God made us to live and love and to grow… It’s not our fault as a Transgender woman or a homosexual man to want to live a normal life…wanting to be in love have a family build your own legacy and because a Man could not accept who he was as himself and individual he felt the need to take my cousin’s life but not just my cousin… Someone Child, someone sibling, someone friend, a beautiful child, and a whole family who loved Ja’leyah-Jamar soo much and we will never be the same…”

In response to the murder, the Kansas City Anti-Violence Project — a group that provides domestic violence, sexual assault, and hate crimes advocacy and education to LGBTQ people — issued the following statement:

“As we hold space to remember and uplift Ja’leyah, we must also recognize the factors at play that contribute to the dramatically increased risk of violence that trans women of color — especially Black trans women — face every day.

Restrictions on basic needs and services like housing, employment, safe streets, healthcare, and protection under the law are just some barriers that put our sisters in harm’s way daily.  The discriminatory and violent systems that perpetuate violence against transgender women of color are a direct result of bias from within and outside our own communities.

Ja’leyah’s light shone to a select few, but we will let her light shine on all of us today.”