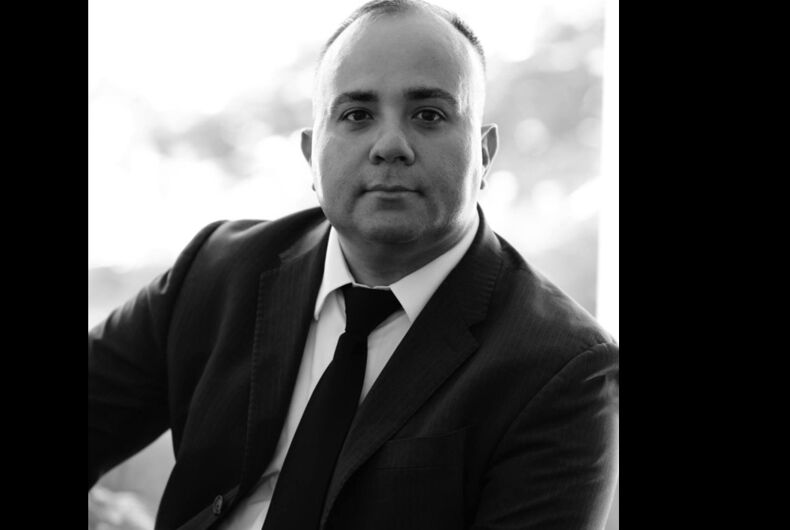 There’s an ever-present duality that runs throughout so many things about Jesse Garcia’s life. In fact, he says the first thing to know about him is that he is a boy from the Texas/Mexico border who grew up in a bicultural world. And it is this biculturalism, this duality, that has fueled his strong sense of service, particularly in building bridges between two of the communities that define him most: the Latino and the LGBTQ communities.

While he has long served the federal government as a communications professional during the day, by night Jesse has also been committed to advancing the LGBTQ community. His early days of activism in college (he and fellow queer activists on campus unsuccessfully tried to establish a gay rights group at the Catholic Our Lady of the Lake University) served as the foundation for his foray into the gay rights movement in Dallas after college.

It was during his tenure as chapter president of the Stonewall Democrats of Dallas that he did outreach to the Latino community, via League of United Latin American Citizens (LULAC) national leaders in North Texas. He was looking for support in the fight against Proposition 2, which would amend the Texas state constitution to define marriage between men and women only.

But that outreach would ultimately fall short. He was told there was not enough time before their national convention for the organization to officially get behind Jesse’s effort. Instead, they suggested he establish a local council so he could plant the seeds for building support.

“I was hurt. I mean, here was this civil rights organization making the decision not to address what I saw as a very important civil rights issue,” said Jesse. “But, I also get it because here I am asking for assistance from people who have probably never seen a gay person come to their aid on something like immigration issues.”

He took that criticism, parked it, and went back to work fighting Prop 2. And they lost. Badly: 76% of voters approved of the amendment.

However, there was something Jesse and others noticed when they looked at the final results which showed that while white and black voters voted overwhelmingly in support of Prop 2, the Latino vote broke about even.

“It was clear there was potential for ally-ship in the Latino community,” said Garcia. The next move was instructed to start building those bridges. It happened in 2006 when he was at the immigration rights mega marches held that spring. He noticed a number of Pride flags in the sea of others, and he knew then that the time to unpark that suggestion for a LGBT LULAC council was now.

“We got everyone’s names, we formed the chapter in June, we had 40 people signed up and we launched,” he said.

In the first two years, they spent time getting invested in the community, mindful of what he had heard by so many Latinos, “why are you coming to us with your problems when you haven’t heard ours.”  He told his group they needed to start learning and talking about the DREAM Act, about comprehensive immigration reform, about HIV which affected both LGBTQ people and Latinos.

“Let’s find issues that affect both communities before we start asking for marriage rights, for repeal of DADT, for support of ENDA,” said Garcia. “They wanted to make sure Latinos saw that the LGBTQ community was there for them.”

The first big test for the new council came when it was asked to help organize against landlords in the area that were denying immigrant families housing.

“The gay Latinos really started to show up and we began to impress the other councils.”

Working at the intersection of LGBT and Latino communities earned them much recognition and praise, and within two years, Garcia’s council won “Council of the Year” for Texas.

After winning that award, they decided the timing was perfect to begin working on LGBT rights. The first issue was work on a resolution in support of repealing “Don’t Ask, Don’t Tell.” And it passed! Next was the national convention.

Jesse led his council through some shady floor shenanigans at that convention (the U.S. Army was a sponsor that year) in which an approved resolution was left off the ballot. So they introduced it from the floor in what resulted in a dramatic scene that ended with a unanimous vote for his council’s resolution.

“Luckily we were sitting next to the abuelita’s from South Texas and had learned about our cause, and they were cheering us on,” said Jesse.

The following year LULAC passed its support for ENDA. Not long after that, UAFA (United Americans with Families Act), and in 2012, the national council supported marriage equality. It was a remarkable accomplishment for Garcia and his council members for pushing LULAC toward supporting some of the most important issues important to the for LGBTQ equality.

These days, Garcia is still working to forge ties and build bridges between the Latinx and LGBTQ communities through his work with the DC LGBT LULAC Council, LULAC Lambda, which he also cofounded. He is also still a dedicated public servant working for the federal government.

In his spare time, Garcia hosts a weekly podcast, which he started after the 2016 election, to counter the negative attacks that have been lobbed at Latinos since the president began his campaign. Garcia’s podcast, “The Jesse Garcia Show,” seeks to highlight the positive contributions of Latinx people who are often behind many of the advancements our community has made, but who often don’t get the recognition they deserve.

The podcast is the most recent manifestation of Garcia’s attempts at making sure Latinx are heard and making sure he’s doing his part to keep his dual communities in harmony.

“This has been my life’s work,” said Garcia. “If I wasn’t leading the charge or drafting resolutions to get this national organization on board with LGBT issues, I’ve mentored the people who have.”

While Garcia had been active in the LGBTQ community since coming out in 1991, it wasn’t until 2006 that he told his mother and the rest of his family the truth about who he was.

In 2006, when Jesse cofounded LULAC’s first LGBT council, The Dallas Rainbow Council, his mother asked him to help her get a computer so she could get online to keep tabs on the Dallas Cowboys and on Las Vegas. The realization that she would be searching his name and discovering his activism worried him and he knew he had to tell her.

He meant to do it on his trip home, but he just wasn’t able to do it. After arriving back in Dallas, he took the opportunity during her call to check up on him.

“Everything was fine. She accepted from day one,” he said. “My family has been awesome and ok with it, and they are very happy I’ve been successful.”