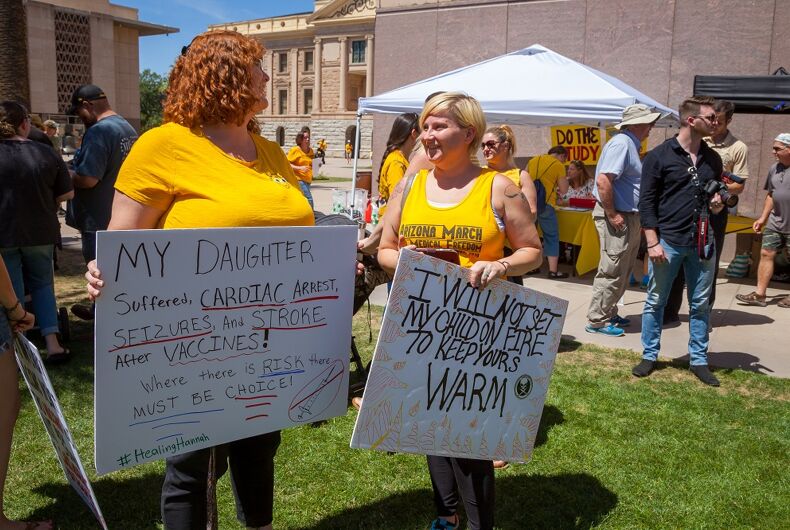 MAY 18, 2019: Two women holding signs at a demonstration against vaccinations in Arizona. Photo: Shutterstock

Anti-vaccination protestors in Sacramento are claiming that they’re the newest civil rights movement on the block.

Protestors gathered at the California State Capitol this past Friday to protest legislation that would crack down on parents who refuse to immunize their children against contagious diseases, claiming that they’re fighting for freedom and equality, just like African Americans, women, and LGBTQ people have done.

Related: Here are the 15 dumbest theories about what makes people transgender. No, vaccines won’t make you trans.

Politico reports that the group of mostly white women sang “We Shall Overcome” in the capitol building, a gospel song that became an anthem of the Civil Rights Movement.

They chanted “No segregation, no discrimination, yes on education for all!” and wore T-shirts that said “Freedom Keepers.”

They also had a sign that said, “Welcome to Calabama, y’all,” a reference comparing California governor Gavin Newsom (D) to former Alabama governor George Wallace, who was famous for his opposition to racial integration.

They lay their references to the Civil Rights Movement very thick, and they also referenced LGBTQ rights and other social justice movements. Some of the protestors wore red capes and white bonnets, a reference to The Handmaid’s Tale, which described a feminist dystopia. Others held signs that said, “Welcome to Nazifornia.”

Christina Hildebrand of A Voice for Choice said that the anti-vaccine movement is about bodily autonomy, just like the LGBTQ movement.

She also said that the anti-vaccine movement is about parental rights, which is usually a concept brought up to quash LGBTQ equality, not support it.

“To me, do I think it is comparable to MLK and the civil rights movement?” she told Politico. “I think we’re probably in the beginning stages of getting to something like that.”

“This is misappropriation of a movement that really is not over and proves to be challenging to overcome,” said Assemblywoman Sydney Kamlager-Dove (D). “The whole conversation around vaccinations is actually one about privilege and opportunity. It’s a personal choice. It’s a luxury to be able to have a conversation about medical exemptions and about whether or not you think your child should be vaccinated.”

In 2015, in response to measles outbreaks, California passed legislation ending the religious and personal belief exemptions to vaccination requirements, leaving only the medical exemption.

According to a study by the American Public Health Association, students in California with personal belief exemptions were predominantly white and wealthy.

But state legislators say that that exemption is being abused as parents shop for doctors sympathetic to the anti-vaccination cause. The new legislation, which was signed into law by Governor Newsom, would allow the state to investigate schools that have less than a 95% vaccination rate.