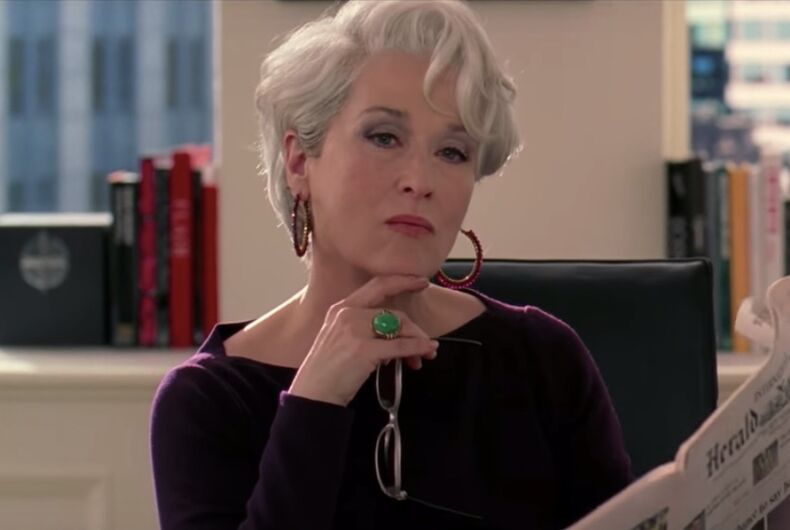 Meryl Streep as Miranda Priestly in the 2006 film "The Devil Wears Prada."Photo: Screenshot

A Chicago theater has announced that in 2020 it’ll unveil The Devil Wears Prada: The Musical with music by Elton John.

From July 14 until August 17, 2020 the James M. Nederlander Theatre will show its stage musical adaptation of Lauren Weisberger’s 2003 novel which was turned into a 2006 film of the same name. Tickets for the musical go on sale starting October 6.

The Advocate reports, “The musical will be directed by Anna D. Shapiro, with music supervision provided by Nadia DiGiallonardo. The book is by (gay playwright) Paul Rudnick and — fresh from his hit musical film Rocketman — Elton John will be providing music with lyrics by Shaina Taub.”

While Paul Rudnick wrote the very gay plays Jeffrey (1994), The Most Fabulous Story Ever Told (1999) and a contribution to the 2013 anthology Standing On Ceremony: The Gay Marriage Plays, Elton John has previously written music for the 1994 and 2019 Disney film The Lion King, the 1998 musical Aida, the 2005 musical Billy Elliot and the 2005 Anne Rice vampire Broadway musical Lestat.

Tickets will likely sell out quickly, not only because of Elton John’s involvement but also because the 2006 film became a hit among both straight women and gay male fans for its insider’s look at the fashion industry and Meryl Streep’s show-stealing performance as Miranda Priestly, the icy and withering editor of the fictional fashion magazine Runway.

Here’s a video of Streep making her grand entrance as Priestly in the 2006 film:

Streep snagged a 2007 Best Actress Academy Award nomination for the role and won other Best Actress nominations and awards for it too. Priestly is believed to be based on real-life Vogue fashion editor Anna Wintour as Weisberger was once her personal assistant.

Although the film features a gay character, Nigel, a man who serves as Runway‘s creative director, the story itself isn’t pointedly gay. Rather, some viewers took a shine onto its plucky young female protagonist, Andrea “Andy” Sachs (played in film by Anne Hathaway), an aspiring journalist who initially loathes the superficial fashion world but ends up excelling in it as her aptitude grows.