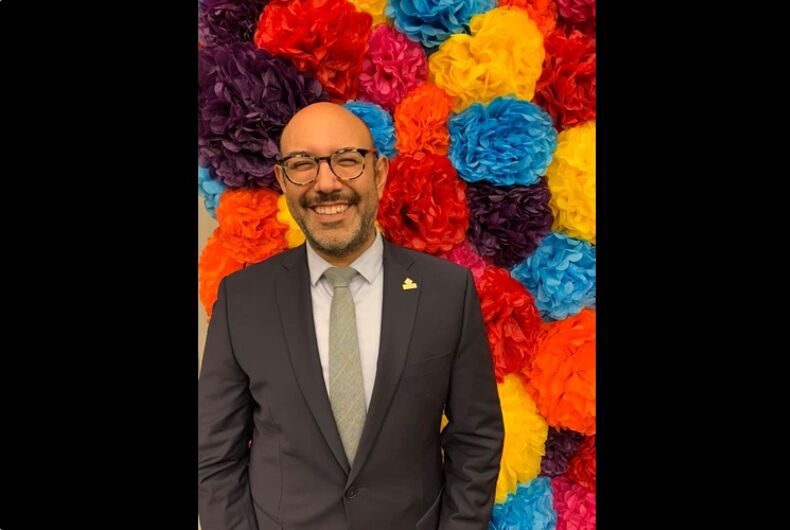 Building political power in the Latinx community has been a family affair for Ruben Gonzales his whole life. Organizing is in his DNA.

His grandfather was a union leader in Arizona who was always running for political office and his grandmother was heavily involved in elections as a poll watcher. She even ran her own GOTV efforts which involved harassing family and friends of family by phone who had not turned out to vote yet that day.

Ruben had his first taste of political activism at 11 when he participated in MLK Day protests against Arizona Gov. Evan Mecham. The governor gained national attention when he canceled the holiday just days after his inauguration. Arizona had been the last state to adopt the holiday and Gov. Mecham was eventually impeached from office.

“It was just something that was ingrained in us from a very young age, that activism and getting involved politically is just a part of life,” said Gonzales.

In fact, he volunteered on his first campaign because his mom wanted to make sure her sons were doing something active. Ruben’s mom decided they would volunteer for the late Rep. Ed Pastor’s first campaign for Congress. They arrived at Pastor’s campaign office, and his mom instructed staff to use them how they saw fit. They were quickly put to work door-knocking in the district.

“We were put with these two older women and I was just amazed at the experience. I had no idea you could actually do that, just knock on someone’s door and tell them who you want them to vote for.” he said.

The 7th Congressional District was safely Democratic, made up mostly of Latinx and Black voters, but it had always been represented by allied white men. Rep. Pastor’s run was historic.

“It was really exciting to win, to be a part of Ed Pastor’s campaign,” said Gonzales. “I really understood from my mom what it meant to have Latinx representation in Congress, and why that made a difference to have a Latinx in that seat.”

That early political activism carries on and is still very much a part of Ruben’s work today.

As the LGBTQ Victory Institute’s Vice President, he oversees all of the group’s programmatic work, striving to foster LGBTQ leaders in communities across the United States as well as working in Latin America and South Africa.

“I’ve always enjoyed elections, understanding the importance of representation, so that fits really with the mission of Victory Institute which is to increase representation of LGBTQ people,” said Gonzales.

In his four years at Victory, Ruben says he’s especially proud of their efforts to grow the organization’s programs and how they serve more diverse communities. For many years, the group had a reputation for being made up of mostly cis-gender white men, says Ruben.

“What I’ve been able to do, under the leadership of our CEO Mayor Annise Parker, is to prioritize diversifying the pipeline of people we train and building out our programs to serve particularly people of color, trans, and gender non-binary people, and making sure they have  tools to run for office and be successful,” said Gonzales.

“We’ve been able to train more LGBTQ people of color and transgender people than ever before, and hit some really high marks with diversity in our leadership development programs. That feels really good being able to do that.”

Drawing on his lifetime of experience in the world of political activism, Ruben understands well that representation matters, and it’s this world view that drives his work at Victory Fund.

“When you have a person of color in a decision-making role, we can hire people that are also going to prioritize this.”

Indeed, Ruben says he’s proud that his team is made up of all women and people of color. Because of that, they truly prioritize diversity, “not in a way that it’s a number on a page or a number we’re trying to reach, but actually as a value and we live that,” said Gonzales.

One of his proudest moments was during his second year at Victory Institute. A corporate funder, familiar with LGBTQ organizations, had been invited to meet with the Institute’s latest congressional internship class. Most often, the funder told Ruben, organizations speak to wanting to have diverse training programs, or pool, or a cohort. And they get there and it’s mostly not diverse.

“He told me that it was the first time that he actually felt like an organization lived up to its promise to the diversity they were committing to when he saw our Victory Congressional Internship class,” said Gonzales.

Like a lot of Latinx people, Ruben says he considers his coming-out official when he told his mom. He had come out to himself in junior high, and then to some friends in high school, But, coming out to his mom was sort of by accident.

As a college sophomore in California, a friend had sent him a postcard to his home in Phoenix and asked him about a boy he was dating. He confirmed to her the postcard’s message during a call she made to ask about it. After a series of “the usual” questions about whether he would be “safe” or whether he was hurt or would hurt himself, Ruben says they didn’t talk about it for almost a year.

It was during a trip back to Phoenix during the holiday break of his junior year that he forced the issue. His heart had been broken and he was moping about the house, very clearly making overtures to his mom that something was wrong. But, he says, she had essentially refused to acknowledge his truth and wouldn’t ask him what was on his mind.

“I confronted her and said that I was heartbroken and that I needed her to be comforting,” he said. “I told her I felt like she wasn’t able to be the mom that I needed because she was so uncomfortable talking about my sexual orientation.”

This conversation was the breakthrough she needed to understand that what was in her head was holding her back from being the mom that she knew she wanted to be. At that point, everything changed and she became a real advocate. She would even become a sort of surrogate mom to his friends who didn’t have supportive family at home.

Ruben is still coming out. Given how central representation and visibility is to his work, Ruben shared with LGBTQ Nation that over the last couple of years, he and his husband, Joaquin, have embraced polyamory. He’s hopeful that opening up about this part of himself will help other LGBTQ Latinx people better understand that they need not define themselves by or limit their relationships to the traditional structures most people grow up seeing.

“Understanding that you can be successful and not have to judge your success against heteronormative standards is important,” said Gonzales. “Relationships can look different than two people in them, and that’s a valid choice and being able to live that and live that proudly makes a difference.”

“Recognize what your values are and know that there are people out there that will be that family for you.”

One of his mentors (he calls him his “mother”), Russell Roybal, told him that as queer people, it’s a privilege, a blessing to be able to choose your own family.

“As Latinx people, we grow up understanding the importance of family, most of us in our culture, that’s sort of the core of who we are,” said Gonzales. “For many of us, our families may not be the place where we’re most comfortable being ourselves. Russell helped me to realize that being a queer Chicano gives you this blessing to be able to create this really tight knit people in your lives that value and support you.”

Alexandra Billings is about to make transgender history on Broadway