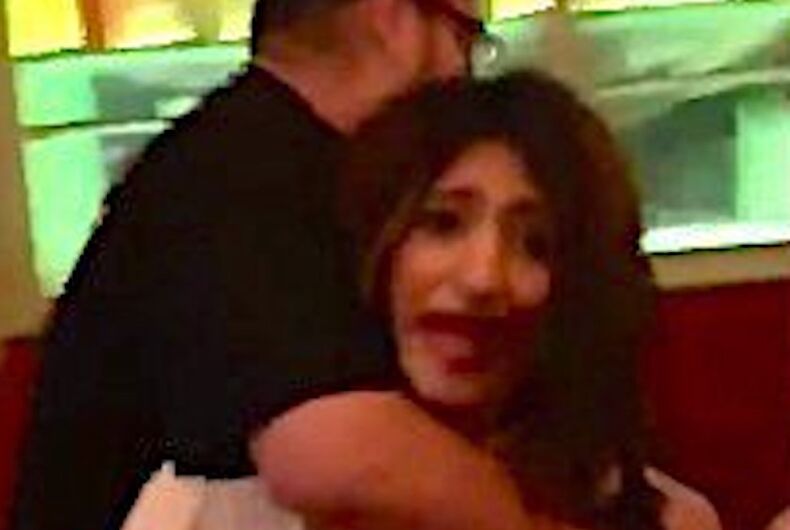 A trans woman grabbed around the neck by a bouncer at Las Perlas in Los Angeles.Photo: Screenshot

On Friday night, bouncers at the Los Angeles bar Las Perlas forcibly ejected two trans women and a queer man after they were allegedly threatened by a straight couple. A bouncer put one of the women in a headlock. The ejected patrons were associated with Bienstar, a nonprofit serving LGBT and HIV-positive Latinx people in Southern California.

A video of their ejection has since been viewed over 266,000 times on Twitter (and is viewable below). The bar has called the incident “unfortunate” and has pledged to donate all weekend profits to Bienstar. But protests outside of the bar and online have demanded more accountability from the bar for it rough handling of the queer patrons.

The incident occurred during the city’s DTLA Proud Festival, a two-day weekend festival celebrating the culture, history and diversity of the LGBTQ community in Downtown L.A. and beyond.

Bienestar program manager Khloe Perez-Rios said she and a group of fellow employees and volunteers had visited Las Perlas for a dinner break after assisting with DTLA Proud’s opening ceremonies. According to the Los Angeles Blade, a “light-skinned” a heterosexual couple then approached the Bienstar folks.

The Daily Beast reports, “The couple began to ‘aggressively misgender them,’ at one point allegedly saying, ‘We will come back and kill you.’ The couple then allegedly began pushing some of the group members, prompting security to ask the couple to leave.”

The Los Angeles Blade continues, “While the couple was asked to leave the establishment, the group of trans women and gay men were approached by bar security staff and eventually physically and aggressively removed from the bar. That escalation caught on video recorded by Perez-Rios.”

Here is Perez-Rios’ video of the incident:

THREAD: Last night in #DTLA trans women and queer men were forcibly removed from @LasPerlasLA against their will after being subject to #transphobia #hate and #homophobia (1/4) pic.twitter.com/HbiYHJEBlm

“Late Saturday afternoon, a representative for Cedd Moses, CEO of the restaurant hospitality group Pouring with Heart which owns Las Perlas,” issued the following response, according to The Los Angeles Blade:

Last evening, an escalated verbal altercation broke out among two groups of guests at Las Perlas. Our manager on duty asked both groups to leave as the safety and security of our patrons and employees is our tope priority and we have zero tolerance for this type of behavior in our establishments. The guards removed the guests that were not compliant with the manager’s request to leave and did so in accordance with company policy.

This was a rare and unfortunate incident as Las Perlas has provided an inclusive and welcoming environment since it opened almost 10 years ago. We will continue to value and celebrate the diversity of the downtown Los Angeles community we are so proud to be a part of and all profits from Las Perhaps during this weekend’s DTLA PROUD (8/23 – 8/25) will be donated to Bienstar Human Services.

That donation may not be much, however, as the bar was reportedly forced to close last night as hundreds protested the incident outside its front door.

#LasPerlas bar in DTLA was forced to close for the night as hundreds rallied in support of the Trans community. Video of incident last night shows Trans women being thrown out by security following a verbal assault that turned physical between them and heterosexual couple. @KTLA pic.twitter.com/XheLRV8QTW

During the protest, Jorge Gutierrez, the queer man ejected from Las Perlas, said to the crowd:

We stand here as survivors and we will not let any establishment that trans lives do not fucking matter. Share that video. Share it. Close this motherf*cking business down! Close it down!They don’t deserve our dollars…our hard working undocumented f*cking dollars!”

Bienstar has since said that it’s following up with Los Angeles police officers who reported to the scene. A potential hate crime incident report has been filed with the police.

Bienstar has also offered sensitivity training to the security staff of Las Perlas.