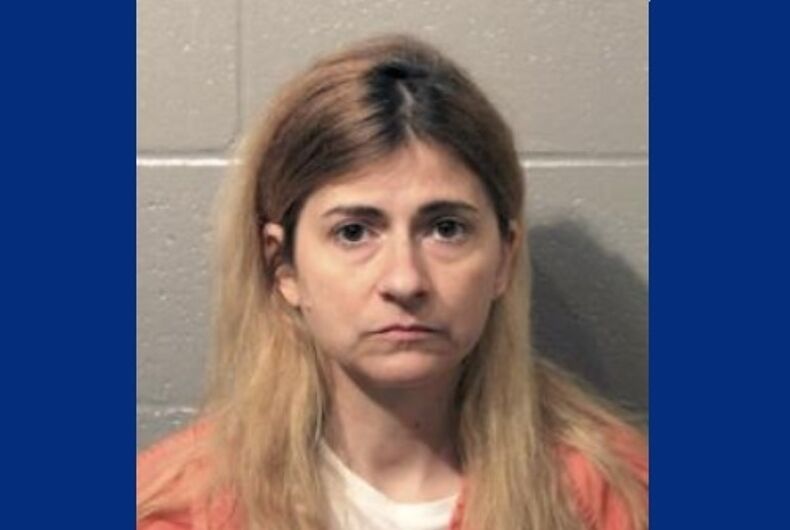 An Oklahoma woman is facing five charges in connection to racist, homophobic, and transphobic graffitti in Oklahoma City.

On March 28, the glass doors and pavement outside the Oklahoma Democratic Party building were spray-painted with Nazi symbols and hate messages that included “Gas the Jews,” “White planet only. Gas the rest,” “Democrats N****r Trannies,” “Go to Germany Weimer degenerates,” and swastikas.

Related: Someone shot up an LGBT advocacy group in Oklahoma

Vandalism at the Oklahoma Democratic Headquarters 😔 This is disgusting….have anything to say @realDonaldTrump?? I see your name on there pic.twitter.com/33e2gCPF1c

Similar graffiti was found outside the Oklahoma City office of the Chickasaw Nation, where the words “Indians will be gassed” were painted.

A week later on April 4, similar graffiti was found again outside the Democratic Party building and a school.

Allison Christine Johnson, 45, turned herself in to police in Norman, Oklahoma, just south of Oklahoma City, where she was arrested. She was caught on video defacing the Democratic Party headquarters.

She said that she wanted to scare Jews and racial minorities and spoke at length with police about her racist beliefs and her goal to “wake people up.”

Can you help investigators ID this woman, wanted for questioning in connection with graffiti found at a business in the…