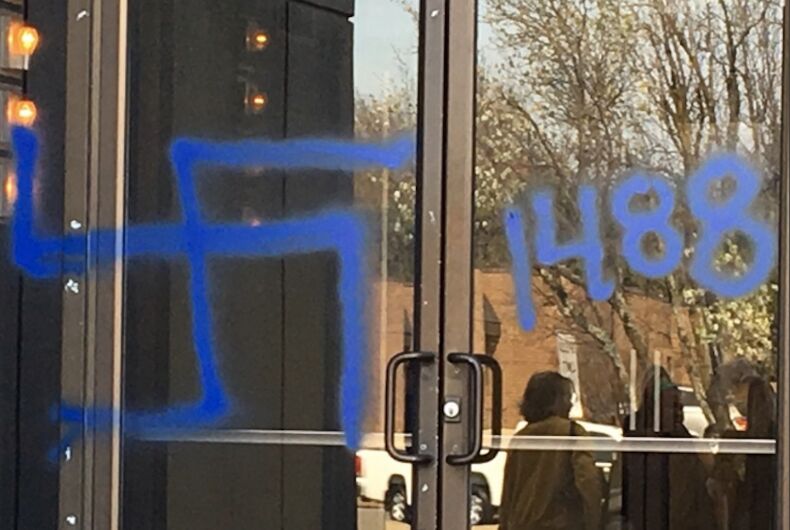 Oklahoma City police are seeking a female person of interest in the spray-painting of Nazi symbols, racial and transphobic slurs on office buildings used by the Oklahoma Democratic Party and the Native American Chickasaw Nation two miles away.

“HH” is white supremacist code that stands for “Heil Hitler,” and “1488” stands both for the 14-words slogan — “We must secure the existence of our people and a future for white children” — and “Heil Hitler” (H being the 8th letter of the alphabet).

The Oklahoma Democratic Party building also had graffiti of the word “Israel” crossed out as well as the phrase “the Goyim know.” (Goyim is a word for a non-Jewish person.)

The vandal or vandals(s) also posted a rambling letter written on brown paper in red marker and blue ink that featured an image of former President Barak Obama, a bleeding bullet wound on his forehead,  and a racist screed stating, “Trump Pence Hitler 2020” and “Where are all the f*ck*ng white people?”

Vandalism at the Oklahoma Democratic Headquarters 😔 This is disgusting….have anything to say @realDonaldTrump?? I see your name on there pic.twitter.com/33e2gCPF1c

The graffiti in front of the Chickasaw Nation building read, “Indians will be gassed.”

Community members gathered to scrub and pressure spray the graffiti away the following morning. They also hung an overhead banned that showed through the Democratic Party’s glass doors reading “Love will prevail.”

Gesturing to the crowd of cleaners, Enchassi continued, “But at the same time, this is what love looks like: Looking at people from all phases of life, coming here together cleaning what the perpetrator thought would make us intimidated or scared. But it actually brought us together.”

Oklahoma City Police have released images of a woman wanted in questioning for the vandalism. Police have encouraged community members to call with any information they might have.

Can you help investigators ID this woman, wanted for questioning in connection with graffiti found at a business in the…