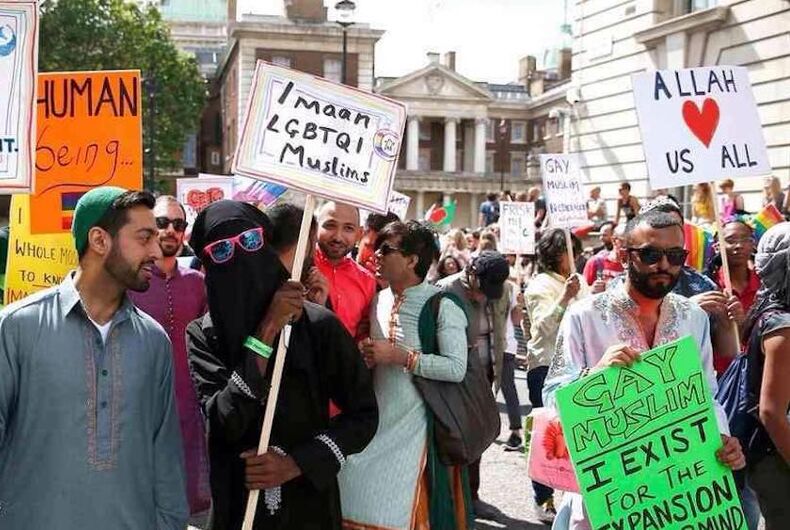 The U.K. LGBTQ Muslim charity Imaan is spearheading the event in commemoration of its 20 years of existence helping “thousands of people to reconcile their sexuality and gender identity with their Islamic faith,” writes The Independent.

Related: Christian radio host tells listeners NZ shooter had to ‘take things into his own hands’ to stop Muslims

Citing a rise in homophobia among conservative Muslims amid protests against LGBTQ-inclusive education in England’s schools, Imaan wrote in a statement:

“The current political climate, together with Brexit, migrant crisis, Boris, and Trump has emboldened Islamophobes … Often LGBTQI Muslims are caught in the middle of Islamophobia and homophobia, so we want to provide a safe and inclusive space where people feel like they do not have to choose between identities and that they can be LGBTQI and Muslim without pressure from those who say otherwise.”

Imaan reached its original fundraising goal of £5,000 and has since doubled its goal amount to make the event larger and more inclusive. The event will include a march and festival as well as panels, discussions, speakers, arts, culture and history programs.

While some people think of the Muslim faith as incompatible with (or even hostile to) LGBTQ rights and people, Islamic culture has a history of accepting gay and bi people, the Quran says nothing against LGBTQ people, and Muslims are actually more tolerant of homosexuality and same-sex marriage than even some Christians (in America anyway).

Anti-LGBTQ sentiment grew in the Middle East mostly thanks to the effects of 19th century British colonialism, the rise of anti-Western Muslim clerics in the ’80s and anti-LGBTQ theocrats who’ve ruled the region following skirmishes from the ’70s to the current day.