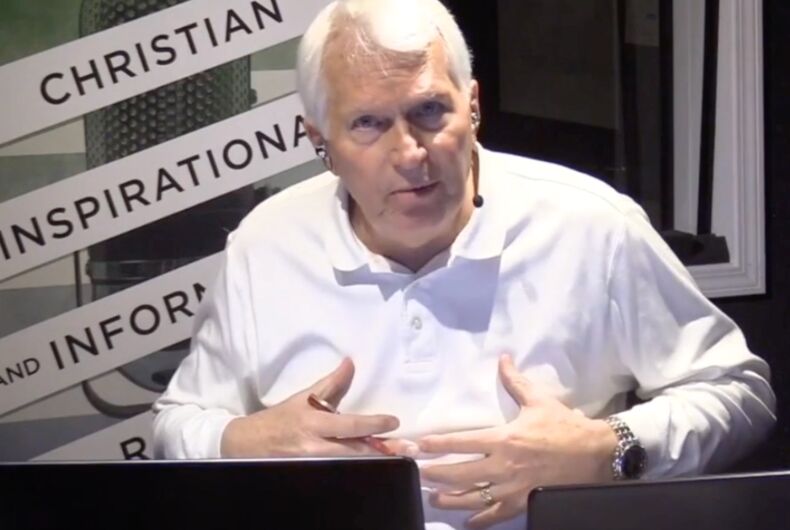 In a letter from their lawyer, the group said the following, “AFA operates three radio networks, with numerous programs, and its various weblog pages. We require allegiance to the authority of scripture and to orthodox Christian values. AFA employees, on-air personalities and writers enjoy a tremendous amount of freedom concerning the topics they discuss and how they handle them. Each radio program that airs on our three networks always include the disclaimer that the host’s views are their own and do not necessarily reflect AVA’s views.”

The group did not say that they disagreed with Fischer’s statements and for days after the mass shooting, they promoted a blog post on their site written by Fischer that echoed his anti-Muslim statements on the radio program and claimed the solution to gun violence and mass shootings is “prayer and a whole bunch of loaded guns.”

“Sadly, Muslim attacks on Western infidels have become so common the news doesn’t even cover them, so most people don’t even know about them,” Fischer said in the article. “It’s like they never happened.”

The American Family Association is a particularly vicious anti-LGBTQ hate group that masquerades as a Christian charity. And Bryan Fischer, the former spokesman for the org and a prominent host of one of the group’s radio programs, is the worst of the worst.

Fischer, who regularly makes outlandish claims and twists facts to fit his “Christian” worldview, is now making excuses for the shooter who invaded two mosques and killed 49 people in New Zealand. The man targeted the victims because they were Muslim.

The shooter has identified American President Donald Trump and the far right hate groups he supports as an inspiration for the attacks. He livestreamed the carnage on social media.

Fischer started his segment by declaring “I hate Islam.”

“One of the things that happens to guys like this is, if they’ve got some loose wiring to begin with and they see that their government is not doing what is necessary to protect them — whether it is from illegal aliens, whether it is from jihadis, whether it’s from vengeful Muslims — if they see that their government is not doing their jobs to promote justice, to carry out justice, to protect national security, then they’re going to start thinking, ‘Well, I can’t count on the government to do it, so I’m going to have to take things into my own hands.’,” Fischer said on air.

“That’s where you get vigilante justice and, unfortunately, I think we saw a case of that today in New Zealand.”

Fischer was fired as the group’s spokesman in 2015 after suggesting the Nazi Party was started by gay people, that Adolf Hitler recruited gays into his Army for their savagery, and that gay activists are modern-day Nazi Stormtroopers. The “firing” was only window dressing since he was allowed to keep his radio program and his dangerous rhetoric is regularly touted by the organization.

Her life was ruined after her famous employer discriminated against her. Now he won’t pay up.