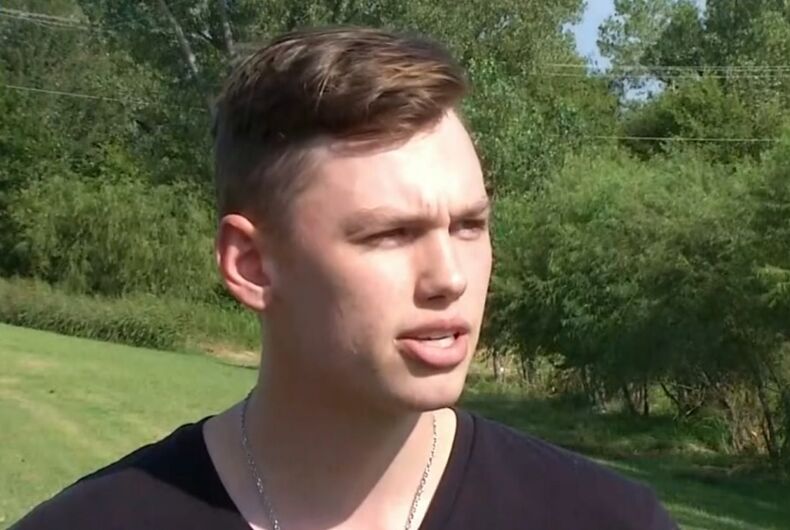 A gay couple says that they were attacked by a church’s congregation in attempt to convert them to heterosexuality.

Sean Cormie, 23, recently came out to his family in Blackwell, Oklahoma. Since then, his family has been trying to get him to go to church with them and to bring along his boyfriend, Gary Gardner.

On September 8, they finally went to The First Assembly of God Church with Cormie’s family. He said that he had already gone to that church’s service several times.

“I wanted to go to church to make my mom proud and make her happy,” he told Oklahoma News 4.

But the church service was a trap. It started like normal, but the pastor then asked them to come to the altar.

“It’s a sin, it’s an abomination, you need to realize, wake up, and see it for a sin,” the pastor said, according to Cormie.

He said they started to leave, and Gardner was pushed away by other church members. Cormie, though, was forced to stay and he was slammed to the ground by his stepfather. A group of 12 to 15 church members held him down and prayed over him.

“Sort of picked him up and body slammed him over and started praying on him, and when they were doing that, Sean ended up with marks on his arms a black eye and sort of blacked out,” Gardner told News 9.

“They started holding me down praying in tongues, which I just started crying,” Cormie said. “I was just crying ‘mercy, mercy.'”

“My sister convinced them to let me go,” Cormie said. “She held my face and said, ‘God is in you. Speak, speak, speak, Sean. This is not their judgment, this is God’s judgment. They don’t have the power of God in their minds.’”

Gardner said that they’re speaking out against the church because they want it “shut down.”

“If they’re going to treat people like that, they don’t need to be open.”

Cormie, who said that he believes being gay is a sin, appeared more forgiving, but he wants “consequences” for the church.

“I love the pastors with all my heart, but what they did was totally wrong, and I want some kind of consequences out of it,” he said. “I want it to be heard and known because it really saddens my heart.”

Cormie said that family members and other people from the church are telling him to drop the issue.

The church put out a statement that says it was a “family matter that escalated.”

“Our church would never condone restraint of any person unless they were engaged in violent activity,” the statement said. “There is much more to this incident, and we are cooperating fully with law enforcement to hopefully bring all of the facts to light as a rush to judgment is not in anyone’s best interest.”

Police have been contacted but they are not commenting on the investigation.