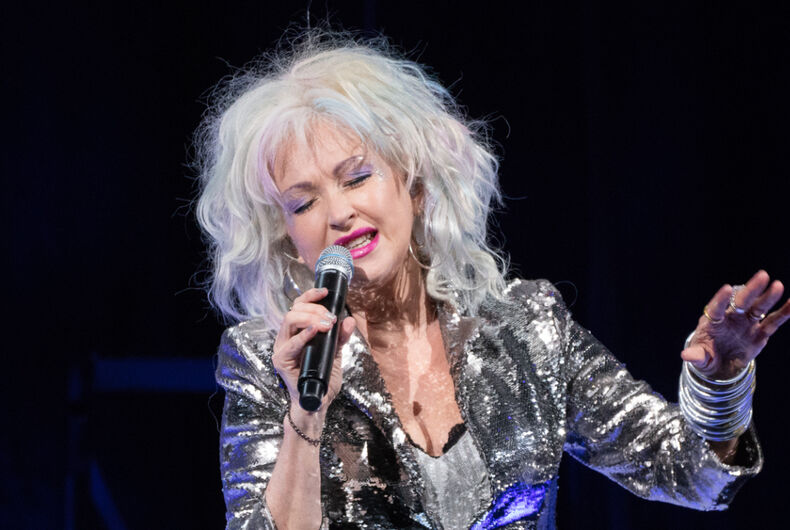 Lesbian actress Jane Lynch has revealed that she and pop star Cyndi Lauper are developing and will co-star in a comedy series that she describes as “kind of a ‘Golden Girls’ for today.”

Related: Why is the gay Golden Girls ‘reboot’ being rejected by all the networks?

“I pitched a show to Netflix and they bought it, I don’t know if I can even tell you, but it’s with Cyndi Lauper, so there! We’ll see. [In the show,] we’re our age, I’m almost 60 and she’s 65, and we’re looking for our next act, without ever having had husbands or children. And there will be two other people who haven’t been cast yet. But it’s kind of a ‘Golden Girls’ for today.”

Lane and Lauper are creating the series with lesbian comedian and comedy screenwriter Carol Leifer. Leifer is an Emmy-nominated writer and stand-up comedian who has written TV scripts for “Saturday Night Live,” “Seinfeld” and other shows.

There’s no word on when the show might air since Netflix has declined to comment, but if Lynch, Lauper and Leifer can get the comedy right, it’s possible that devoted “Golden Girls” fans could flock to the new series, making it a quick success.

Out.com noted that the series sounds a bit like the “Frankie and Grace,” Netflix’s longest-running series which features Jane Fonda and Lily Tomlin as two close friends and divorcees who move in together after their newly out gay husbands marry one another.

Many gay viewers took a shine onto “Golden Girls” because it features strong female characters with active love lives, raunchy humor and a “chosen family” of seniors who love and care for each other despite not being biologically related — a concept that resonates with people who’ve been disowned by their families for being LGBTQ.

The “Golden Girls” writing room also hired gay writers like Stan Zimmerman who added their queer sensibilities and compassion for social outcasts into the show. Zimmerman has since written a pilot for a gay “Golden Girls”-style show entitled “Silver Foxes,” but it has yet to find a buyer.

The old gays try Grindr for the first time & they’re not shy. At all.