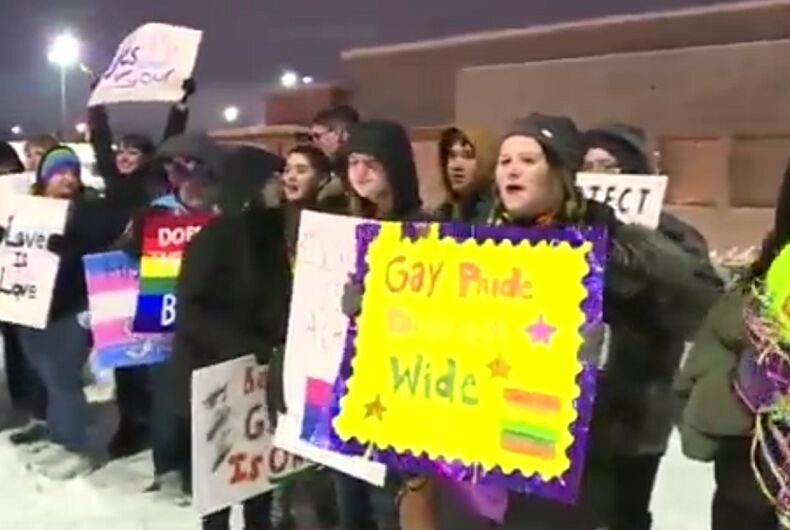 Residents of a Michigan city came together to protest conversion therapy being offered by a church.

The controversy started last week when the Metro City Church in Riverview posted a message on Facebook promoting what it called an “Unashamed Identity Workshop” for “girls only (by birth), 12-16 years old, for those struggling with the thoughts that they are Trans – Bi – Gay or other.”

The description made it clear that the church was talking to parents who could force their kids to attend. “Through thoughtful, relevant and biblical counsel we will help your girl be unashamed of her true sexual identity given to her by God at birth,” the message said.

But Pastor Jeremy Schossau said that the class, which costs $200, isn’t conversion therapy because it isn’t violent. “My understanding of conversion therapy, is, when somebody’s being dragged into a counselor’s office, therapist’s office, or a pastor’s office, and they’re beat over the head with the Bible,” he told Fox 2 News. “We want to love people.”

Kimberly Tooley, who attended a class with her transgender son Seth, described it: “I hear homosexuality demon, the demon of, the demon of and in the name of Jesus Christ and all these things and I screamed, I jerked him by the arm and said let’s go.”

“The pastor, the elder and wife, and they started praying and they got louder and they were trying to pray the demon of homosexuality out of me,” Seth said.

Hundreds turned out for a protest in front of the church on Thursday, with signs that said “You’re not a pervert don’t convert” and “God Never Makes Mistakes.”

“This is not right, we should be able to be who we are in our everyday life and who we were born to be,” protester Anton Sims said.

Protest co-organizer Brianna Dee Kingsley said that the church is trying to “repackage” conversion therapy. “The basic premise is you are broken and you need to be fixed and that something is wrong, and we stand against that – we are here to show support for the LGBTQIA community.”

Schossau continues to defend the workshop. “So if somebody wants to talk to us freely out of their own volition because they’re unsettled in their heart, they want to move back toward the heterosexual life why wouldn’t we applaud that,” he said.

But if the workshops were really for people who “freely out of their own volition” want to attend, then why is he focused on getting parents to bring their minor children?