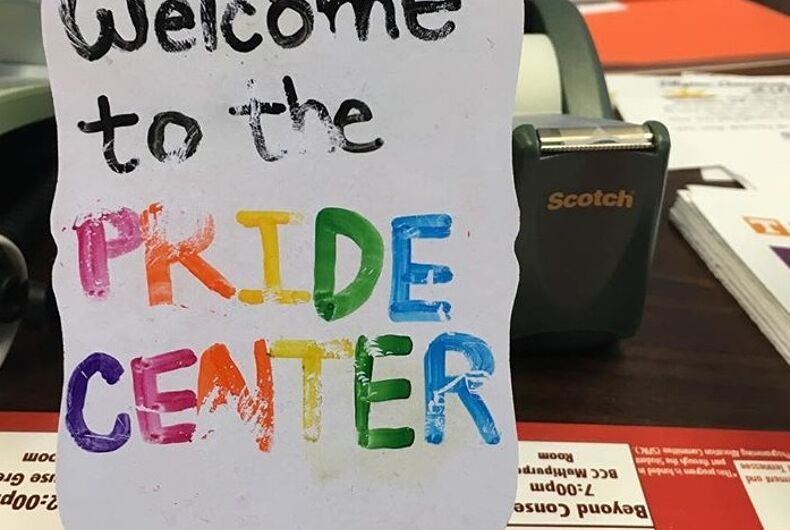 Two years ago, the state legislature cut funding to the Pride Center at the University of Tennessee (UT) in Knoxville, after it became the subject of a maelstrom of attacks in conservative media.

Now some alumni are raising funds to set up an endowment so that the Pride Center will always be there for UT’s LGBTQ students.

For years, Tennessee lawmakers have waged a war on the Office of Diversity and Inclusion, which the Pride Center is a part of.

In 2013 and 2014, conservatives demanded the university shut down its annual Sex Week where students could attend discussions about sexual assault, STIs, and sexuality, and the Board of Trustees voted to let students opt out of having their activities fees go to it.

In 2015, the Pride Center’s newsletter told readers to respect people’s pronoun preferences and discussed non-binary pronouns. It wasn’t anything really new or shocking, but conservative lawmakers went “ballistic,” according to local media. They wanted to cut funding to the Office of Diversity and Inclusion.

In December of that year, the Office of Diversity and Inclusion put a memo on its site explaining a few things departments can do to make holiday parties inclusive of non-Christian students, faculty, and staff. The recommendations were innocuous to anyone who’s used to respecting other cultures – parties should avoid putting an “emphasis on religion” – but U.S. Representative John Duncan (R) ran to Fox News and decried the War on Christmas.

And that was the end of the Office of Diversity and Inclusion’s funding.

The state legislature passed a bill that not only took away their money, but also banned the university from using state money “to promote the use of gender-neutral pronouns, to promote or inhibit the celebration of religious holidays, or to fund or support Sex Week.”

Funds were shifted around in the school and some of its diversity services remained open, but they couldn’t have paid staff anymore.

Alumnus Chad Goldman, who attended the University of Tennessee in the early 1990’s, knew that there was a need for the Pride Center.

“When you’re a young person of that age, life can be challenging enough already, and you’re trying to figure out your way, figure out who you are,” he told NBC. “When you are coming to grips with being gay or LGBTQ… it makes it all that more difficult.”

He said that it was particularly hard to accept himself since he came from such a conservative state. “There was no support group that I knew of. I felt 1,000 percent alienated at the time.”

Goldman visited the campus in 2016 and saw some students under a rainbow banner that said “You Belong Here.” He talked to them and learned that the Pride Center would be losing its funding later that year.

So he and his husband started raising funds. At his annual Superbowl party last January, he raised $9000 and gave it to the university.

“We handed it over to the university unsolicited, and that’s kind of what got the ball rolling with funding the center with private funds,” he said.

UT Chancellor Beverly Davenport asked Goldman to raise funds for a separate, privately-funded endowment for the Pride Center, with a goal of $3 million.

He and another gay alumnus, Gary Bynum, raised $300,000 at another fundraiser earlier this month. Now they’re confident that they’ll reach their goal.

He said that what he really wants is for the Pride Center to be a permanent fixture on campus. “It belongs there just like any other student group does,” Goldman said.