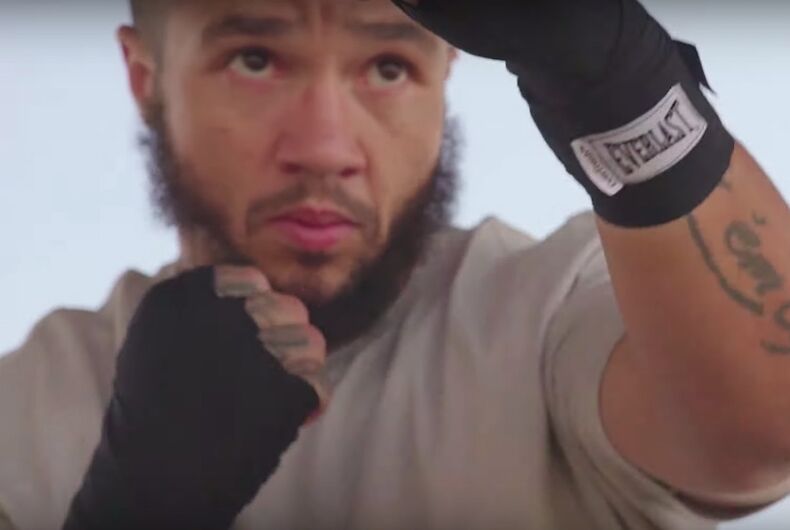 The boxing gear company Everlast has released a four-minute ad featuring Patricio Manuel, the first trans male boxer to compete and win a match at the professional level. Manuel’s appearance in the ad is a big deal considering boxing’s  stereotype as an ultra-macho sport dominated by non-queer men.

In the ad, Manuel discusses the difficult decision he had to make after realizing he could no longer continue “living the lie” as a boxer assigned female at birth. His colleagues warned him that transitioning would “throw away” his entire sports career.

Manuel says he told them:

“If it meant that much to me to risk the love of my life, boxing, then they knew that it was something that was valid. No one just throws away a possible chance at going to the Olympics or becoming a world champion because this is something they’re half-in about.”

“During his transition, Manuel lost his coach, his gym, two jobs and a handful of friends and acquaintances,” writes NBC.

Amid footage of his training, Manuel says:

“I want all of us to be who we are and be unafraid and not to have to deal with every obstacle just to be our authentic self. … So many of us are being forced into these restrictive boxes of identification, but very few of us actually fit, and I want to see all of us be celebrated when we fight against those specific restrictive norms.”

Everlast’s “Be First” ad campaign — a boxing term which means making an opponent follow your pace — showcases a “new crop of trailblazers” including Fransonet Martinez, a boxer lost his left leg in a car accident two weeks before his first pro-fight, and the Banderas family, a Mexican clan who rose from poverty to begin training as Olympic boxers.