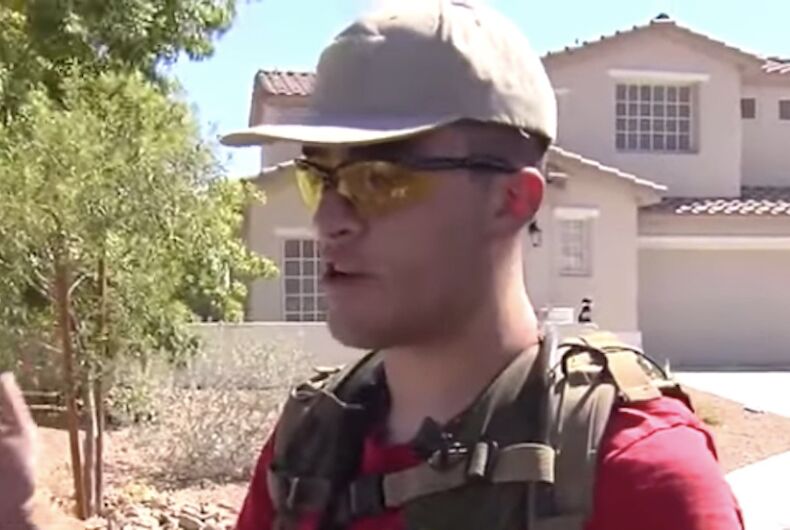 A 23-year-old security guard and white supremacist in Las Vegas, Nevada named Conor Climo was arrested Thursday and charged with possession of an unregistered firearm after investigators discovered components for an improvised explosive device (IED) in his home.

An FBI-led Joint Terrorism Task Force investigation found that Climo regularly used “derogatory racial, anti-Semitic and homosexual slurs” online and had talked openly “with an FBI informant online, telling them that he had identified possible targets near Las Vegas, including police leadership, synagogues, an area in downtown Las Vegas with gay bars, and the headquarters for the Anti-Defamation League,” according Buzzfeed News.

The FBI began investigating Climo after they discovered his communication with the white extremist group Atomwaffen Division. He had reportedly joined a splinter group called The Feuerkrieg Division with the hopes of providing training in IED construction towards a “righteous cause.”

Climo went viral in in September 2016 after pledging to conduct a one-man armed patrol of his Nevada neighborhood while wearing battle gear and carrying an assault rifle and a survival knife. After complaints from frightened neighbors, Climo stopped his patrols and said he would join the neighborhood watch.

Here is news footage about Climo and his 2016 neighborhood patrol.

According to The New Civil Rights Movement, the U.S. Department of Justice, “has been blocking the release of a report that says alleged white supremacists were responsible for every single act of race-based domestic terrorism in the U.S. in 2018…. [The Trump administration has also] substantially reduced or even eliminated funding and programs that combat white supremacist extremism, violence, and terrorism – and then blocked the data from reaching the hands of Congress.”