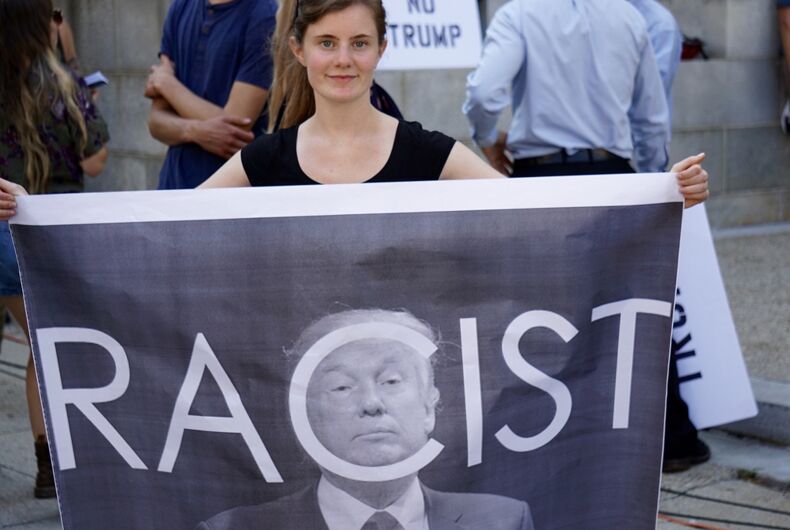 A protestor holds a sign decrying President Trump's racism at a rally in Portland, Maine on 08/04/2016Photo: Shutterstock

Donald Trump depicts Latinx people in the language of disease – as infestation, as criminals, rapists, as ruthless drug gangs, as simultaneously lazy and as workers attempting to steal jobs from white people, and as invading hoards that if allowed to cross our borders, will replace the white majority.

Throughout U.S. history, rather than characterizing immigrants and refugees in humanitarian terms, many conservative and white nationalists and nativists use narratives representing refugees as invaders, as barbarians at the gates who, if allowed to enter, will destroy the glorious civilization we have established among the “lesser” nations of the Earth.

The day Donald Trump descended the escalator in his tower of gold, with head raised forward like Benito Mussolini as if holding court at his press conference announcing his run for the presidency on June 16, 2015, he tossed down the bodies of Mexican people like red bloody Trump steaks as his initial stepping stones on his march to the White House.

Trump has subsequently placed the children of people attempting to gain refugee status into cages, he has ordered a massive buildup of our military to “guard” the southern border from what Trump terms “invaders” from Central America, and he stated that he intends to eliminate the 14th Amendment’s guarantee of citizenship status to people born in the U.S., even if their parents were born elsewhere.

The 2016 Republican Party platform codified the language by defining the “other” as “illegal aliens,” as if they were dangerous and deadly non-human invaders from deep space.

Trump was also a prominent and outspoken “birther.” He consistently tried to define President Barack Obama as “other” by attempting to prevent our former president the right of self-definition – an apparent contradiction within a political party that emphasizes rugged individualism, freedom, and liberty.

A stereotype is an oversimplified, standardized conception or image of a person or group, held in common by members of other groups. Originally referring to the process of making type from a metal mold in printing, social stereotypes can be viewed as molds of regular and invariable patterns of evaluation of others.

Stereotyping can and often does result in singling out individuals and groups as targets of hostility and violence, even though they may have little or nothing to do with the offenses for which they stand accused. This is referred to as scapegoating.

With scapegoating, there is the tendency to view all members of the group as inferior and to assume that all members are alike in most respects. This attitude often leads to even further marginalization.

The origin of the scapegoat dates to the Book of Leviticus (16:20-22). On the Day of Atonement, the high priest selected a live goat by lot. He placed both hands on the goat’s head and confessed over it the sins of the people.

In this way, he symbolically transferred the sins of the people onto the animal, which was then cast out into the wilderness. This process thus purged the people, for a time, of their feelings of guilt, shame, and fear.

When stereotyping occurs, people tend to overlook all other characteristics of the group. Individuals sometime use stereotypes to justify the subjugation of members of that group. In this sense, stereotypes conform to the literal meaning of the word “prejudice,” which is a prejudgment, derived from the Latin praejudicium.

When demagogues play on people’s fears and prejudices by invoking these images for their own political, social, and economic gains, in more instances than not, this results in loss of civil and human rights, harassment, violence, and at times, death.

Modern day white supremacists/neo-Nazis believe that only white Anglo-Saxon Protestant heterosexuals have been granted a soul by God. Everyone else they refer to as “mud people,” those without a soul and without meaning, value, or worth.

As hundreds of white nationalists lined the streets of Charlottesville, Virginia in 2017 to protest the removal of a statue of Confederate General Robert E. Lee from a downtown park, some waved Confederate and Nazi flags, brandished shields, and marched with burning torches. They shouted racist, antisemitic, and homophobic slurs repeating “JEWS WILL NOT REPLACE US!” At one point, they loudly chanted in unison: “FUCK YOU FAGGOTS!”

What these white, mostly male, presumably heterosexual protesters have in common is a belief in a “white ethno-state” according to Southern Poverty Law Center Research analyst Keegan Hankes. He referred to the so-called “alt-right” or far-right movement as a “grab bag of right-wing ideologies.”

While Hankes acknowledged that not all white nationalists are homophobic, he argued that the majority of right-wing extremists are “virulently anti-LGBT,” and that they reveal an anxiety and obsession about white birth rates, which are just barely keeping pace with those of racialized minorities.

Hankes asserts that many of these extremists may blame the birth rate disparity on the nationwide legalization of marriage for same-sex couples.

Politicians and most other residents of the United States alike, from every rung along the full political spectrum, generally agree on one issue: our immigration system is severely broken and needs fixing. Seemingly insurmountable gaps in political solutions to repair the system along with Congressional inaction to the point of blockage have brought the country to the point of crisis.

The murder of eleven Jewish congregants, and injury to six others, including four police officers at the Tree of Life Synagogue in Pittsburgh, and one woman at the Chabad Synagogue in Poway, California, in addition to a spike of 57% of reported antisemitic incidents in 2017 over the previous year, indicate that Jews and other marginalized groups remain at increased risk.

The murder of 19 primarily Latinx people and the wounding of dozens more at a shopping center in El Paso, Texas, the murder of six worshipers and wounding of four at a Sikh Temple in Oak Creek, Wisconsin, and the murder of nine black congregants at Emanuel AME Church all attest to the rising tide of white nationalist terrorism in the United States.

Donald Trump, this white supremacist terrorism Radicalizer-In-Chief, has built his political career on stoking white grievance and nativist supremacy. As such, though he did not pull the triggers on the firearms of mass carnage, he is complicitous in aiding and abetting these domestic terrorists.

The Unite the Right rally, Charlottesville, Virginia brought together white supremacists, members of the alt-right, neo-Confederates, neo-fascists, white nationalists, neo-Nazis, and far-right militias. They killed a counter-protester by plowing a car into the crowd.

He criticized “alt-left” groups that he claimed were “very, very violent.” He later stated that “There were very fine people on both sides.”

Donald Trump, through his actions and through the bullhorn of his rhetoric, has moved the once right-wing political extremes front and center into the mainstream, and along the way, has empowered and enabled the haters to thrive.

We have come to a normalization of burying our dead as despots blare jingoist cries.

Police say this trans woman’s murder wasn’t a hate crime. Her mom’s not buying it.