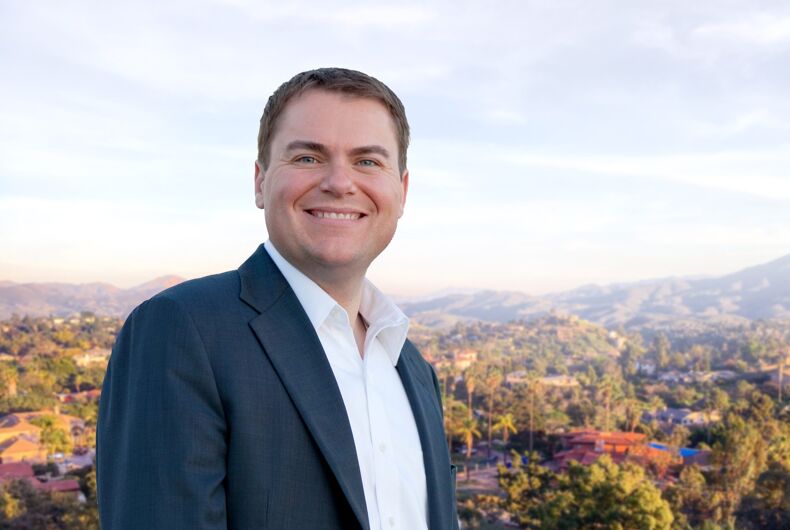 Normally, challenging the incumbent is a useless effort, but not necessarily in this case. Hunter is a deeply flawed candidate, which is a polite way of saying that he’s currently under indictment for corruption. Hunter is alleged to have spent thousands of campaign dollars illegally for personal expenses like vacations and, in one case, “two Punky Brewster items” from Target.

DeMaio is presenting himself as the perfect alternative by wrapping himself in the language of Trump. He’s promoting a “Reform Agenda” that includes claiming that ‘citizens must act to secure the border and end illegal immigration” while decrying California’s “drifting into socialism.”

As for being gay in a party that is doing its best to roll back LGBTQ progress — that’s not a problem for DeMaio because he supports the rollback.

“DeMaio also supports legislation to protect Religious Freedom and will oppose any effort, law or regulation to force Churches and faith-based organizations to violate their religious beliefs,” his campaign site states. “Our churches and faith-based organizations have a fundamental Constitutional right to practice their faith without government interference.”

Of course, religious liberty is just another way of saying civil rights protections don’t apply to LGBTQ people. But then again, based on DeMaio’s website, the LGBTQ issue doesn’t apply because his gayness is mentioned only once, buried in paragraph four of his bio. Mostly he dwells on his role as “the most-recognized reformer and taxpayer advocate in California.” (Since losing his last race, DeMaio’s been a conservative radio talk show host and head of an anti-tax group.)

DeMaio’s 2014 race was a close one, but his campaign was derailed when a former campaign aide claimed that DeMaio had groped him and made unwanted sexual advances. DeMaio in turn charged that the aide was behind a burglary at his campaign offices. The San Diego prosecutor declined to bring charges against either DeMaio or the aide.

The current race isn’t exactly a slam dunk either. There are already four other candidates who are running in the primary. More to the point, the GOP has changed dramatically since DeMaio’s last race. DeMaio’s effort to paper over his sexuality is one acknowledgment of that. But in an era where Republican voters want mini-Trumps, DeMaio is a reminder of a time when the GOP was a bit more open. It may only have been five years ago, but politically, it’s ancient history.

Editor’s note: This article originally said DeMaio’s gayness wasn’t mentioned on his campaign website , but it is once toward the bottom of his bio.