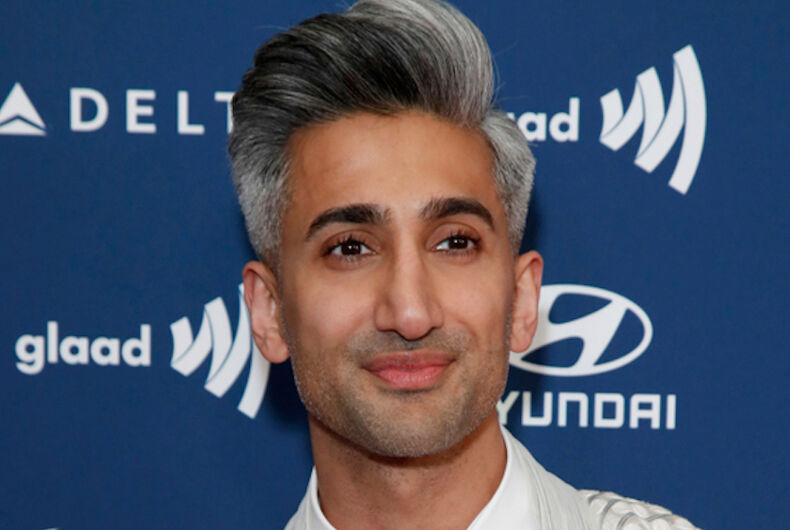 While promoting his new book Naturally Tan, Tan France — the 36-year-old “fashion guy” from the Netflix makeover show Queer Eye — highlighted how racism has personally affected him (especially after the Sept. 11 2001 terrorist attacks) and why he refused to include the story of coming out to his family.

France is one of two men of color among Queer Eye‘s “Fab 5” makeover gurus. He was born in England to strict Muslim Pakistani parents and became interested in fashion as a young boy in his grandfather’s factory which made Disney apparel. He went on to study fashion in college and eventually became managing director of Chanel in his early 20s.

Related: Queer Eye’s Bobby Berk came for Meghan McCain on Twitter & she was not happy about it

In a recent interview with The Chicago Tribune, Tan said that as a child he longed to be white so that people would stop commenting on his race — he even used skin bleaching products at one point. At age 11, he and his 13-year-old brother were beaten up by racist bullies.

Then, at age 18, two planes crashed into the World Trade Center. After that, France felt more stigmatized than ever. Though he has previously protested on Twitter about being repeatedly targeted by the Transportation Security Authority, in his book, he shares his feelings at greater length:

In a chapter titled “911,” France describes being stopped at least 24 times for questioning in airport screening rooms. At the time, he was used to being called racial slurs like “Paki,” but after 9/11, he was called a “terrorist” and “raghead.”

“On the anniversary of 9/11, I see the words ‘Never Forget,’” reads an excerpt from the chapter. “I understand that sentiment. I completely agree with honoring those who lost their lives . But there is another side to this, too. It means we never forget to see my people as a potential threat.”

France explained that his family is “very private” to him and he didn’t want to push them into the limelight without their consent. He doesn’t even name them in the book.

But while France chose to keep parts of his life private — for example, his memoir omits his story of coming out to his family and he only spends a single paragraph on his past suicidal feelings — he says he has since come to appreciate his natural skin color, hence the lighthearted title of his book.

He told The Chicago Tribune:

“It’s my natural skin color. I can do nothing about it. And now it’s given me so much confidence, where at one time of my life, when I was younger, it brought me so much distress and unhappiness. I thought that I would always be seen as less than. Now, the reason I was so happy to call it ‘Naturally Tan’ is because I embrace my skin color so much. I think it’s the most beautiful thing about my appearance. I love my brown skin very, very much.”

Dreaming of adopting someday? Here’s how you can make it a reality.