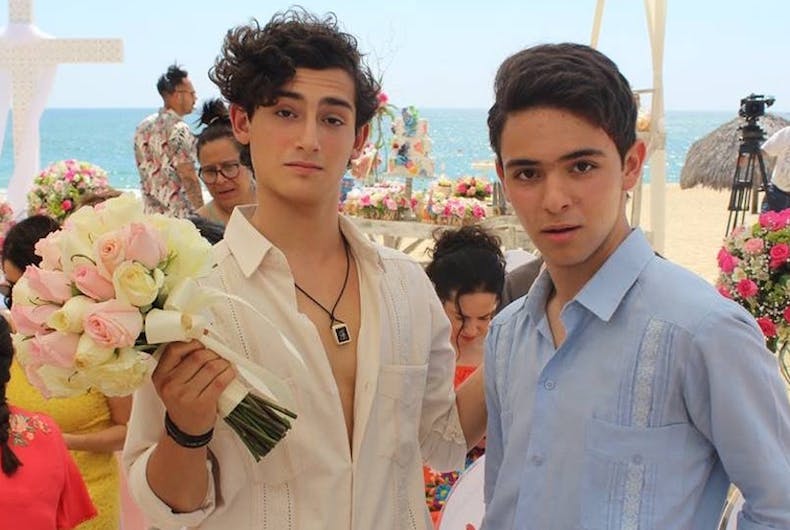 This week, Univision unveiled its first ever gay-led primetime telenovela entitled El Corazón Nunca Se Equivoca (The Heart is Never Wrong), a groundbreaking first for the Spanish-language network and its millions of global viewers.

As we reported in May, the series follow the young gay couple from that show, Cuauhtémoc or “Temo” (played by Joaquín Bondoni) and Aristóteles (Emilio Osorio), as they start a new life together moving for college from Oxaca in Mexico City, the fifth largest city in the world.

There, Aristóteles will strive to be a musician while Temo pursues his interest in politics. But life for them won’t be easy, of course, as the show hopes examine the difficulties of being gay in Mexican society.

Regarding the series, Jessica Rodríguez, president of entertainment and CMO of Univision, said, “We understand that our brand has the power to validate certain themes and that by highlighting previously unaddressed topics, we’re able to empower Latino families around the country to have important conversations.

“We are committed to telling stories in prime time that are inclusive and diverse and that resonate and reflect our culture.”

The same-sex couple’s new telenovela is actually spinoff of the telenovela Mi Marido Tiene Más Familia (My Husband Has More Family). Fans of the show refer to the couple as “Aristemo.”

The couple recently won the honor of Best TV Couple from the E! television network (narrowly beating out the male same-sex couple from the American TV comedy Schitt’s Creek).

Instinct magazine notes that Univision has depicted same-sex couples in its shows in the past, including “a gay marriage in Amores Verdaderos back in 2013… [and] LGBTQ characters on several shows such as… Vida, Amar a Muerte and La Casa de Las Flores.”

While marriage equality has not yet been legalized in all Mexican states, a 2013 Pew Research Center survey showed that 61% of Mexican natives believe society should accept homosexuality. Mexican President Andrés Manuel López Obrador also recently laid out his plan to help fight societal homophobia.

IMDb announced that it will no longer deadname transgender celebrities