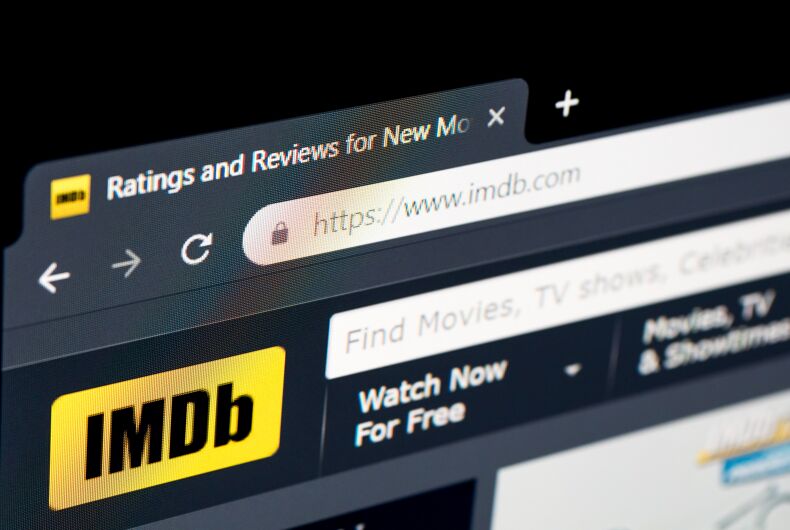 IMDb is an enormous online resource for information about television and films, and now it’s updating its policies to respect transgender people by allowing them to remove their former names from the site.

The website boasts information about six million titles and ten million people, including celebrities but also less-known actors and industry professionals. It says it wants to provide the internet with “comprehensive and accurate biographical information” about the people included on the webpage.

But it has received criticism from transgender professionals, who said that publishing a trans person’s former name without consent – deadnaming them – is a violation of privacy.

“If that were to happen to me, obviously I’d be horrified,” Jake Graf, a trans actor, told IndieWire last year.

Related: Scarlett Johansson will play a trans man, but she doesn’t get why people are mad

“It seems like you’re outing someone. On so many levels, it seems wrong.”

On Monday, IMDb announced an update to its policy. Birth names can be removed if they are “not broadly publicly known and the person no longer voluntarily uses their birth name.”

“To remove a birth name either the person concerned or their professional industry representative simply needs to contact IMDb’s customer support staff to request a birth name removal,” a spokesperson told Variety. “Once the IMDb team determines that an individual’s birth name should be removed — subject to this updated process — we will review and remove every occurrence of their birth name within their biographical page on IMDb.”

The new policy gets more complicated if a professional was credited on-screen with their former name. In those cases, their deadname will be listed in parentheses on the page of the title where they were credited with that name.

“This is in order to continue providing IMDb’s hundreds of millions of customers worldwide with comprehensive information about film and TV credits, thereby preserving the factual historical record by accurately reflecting what is listed on-screen,” the spokesperson said.

GLAAD said that IMDb’s policy change is good, but that the site “still has a long way to go.”

“Revealing a transgender person’s birth name without permission is an invasion of privacy that can put them at risk for discrimination,” said GLAAD Director of Transgender Media Nick Adams.

“IMDb’s new policy is a step in the right direction and gives some transgender professionals in the entertainment industry the dignity and respect that they’ve long deserved – however, it remains imperfect. Trans people with credits under their old name for work in front of or behind the camera will still be affected by IMDb’s determination to publish outdated information.”

SAG-AFTRA, the Hollywood labor union, has been fighting IMDb on another topic concerning internet privacy: publishing professionals’ ages. The guild has argued that that violates a California law that was passed to combat age discrimination. IMDb has been fighting that law in court on First Amendment grounds.

“While this half-measure is a step forward in protecting the personal safety of and reducing employment discrimination for transgender people, in revising its birth name policy, IMDb admits to invading the privacy of performers and putting them at risk for discrimination,” said SAG-AFTRA President Gabrielle Carteris. “IMDb can make no principled distinction to justify its arbitrary choices about when to invade the privacy of performers.”

“IMDb has more work to do,” she added.

Russia is trying to take this gay couple’s kids away. So they’re fleeing the country.