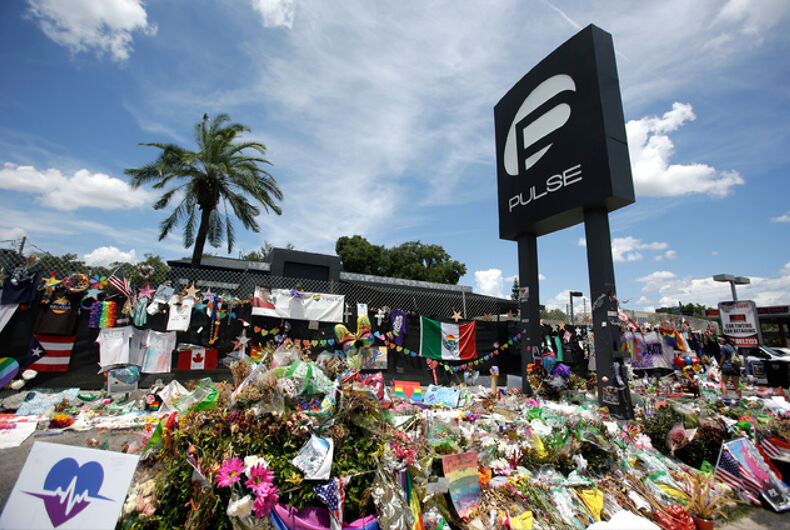 Pulse nightclub in Orlando, Florida on the one month anniversary of the shooting.Photo: Associated Press

Despite objections from some of those most directly affected by the tragic event, Univision went ahead with a program featuring a reenactment of the mass shooting at the Pulse nightclub in Orlando that left 49 dead and dozens more injured.

The show featured interviews with survivors as well as actors depicting the massacre in gross detail.

A review by the Orlando Sentinel captured the sentiment in stark terms of watching the program, noting that it lived down to its name.

“Why foist these horrendous scenes on viewers? Why put survivors and victims’ families through the torture?” writes reporter Hal Boedeker.

“Open-hearted survivors shared their stories with Univision, but their comments were placed next to those terrible, elaborate re-enactments. The Pulse bathrooms were re-created with unnerving detail that would stun anyone who knew the club.

“It was an odd viewing experience. The program would break, jarringly, for cheerful commercials. The Pulse story had become just another product, one to be served up as a horror movie. The victims and their families deserved better.”

Univision posted a trailer on social media but took it down after a backlash that included the club’s owner as well as survivors of the shooting, who reported that it was “triggering” and questioned why the reenactments were needed.

The Crónicas De Sábado Twitter account posted a defensive statement in response to the upset on Thursday.

“Univision has set out to create a report that is deeply respectful of the many people whose lives were impacted by this tragedy and, at the same time, is faithful to the facts underlying this horrible crime,” the post read.

After the comments received for some of the videos related to our next show 'Baño de Sangre', Crónicas de Sábado communicates the following pic.twitter.com/MMOCb20Ni9

The club’s owner, Barbara Poma, posted on the program’s Facebook page making sure her criticisms were clear and made public. Poma called the show “incomprehensible” and “re-traumatizing” and deemed it a sign of a “lack of respect and humanity.”

Some survivors of the shooting confirmed that assessment, saying that it is traumatic to see the shooting in the Pulse nightclub played out again for a television audience.

“I didn’t like it at all,” survivor Angel Santiago Jr. told Mic. “I didn’t want those visuals stuck in my head again. I was very upset about it.”

“How are we as survivors supposed to heal and move on when the media reminds us of what happened to us that night and in such a vivid way like that?” he said. “It’s disrespectful and distasteful. It shows no regard for those who are still alive and who went through it.”

Another survivor, Ricardo Negron, called it “unnecessary” and “triggering.”

“They claim that they do it in a very professional and journalistic and respectful manner, but that trailer is the complete opposite,” he said. “It seemed like a trailer for a cheap horror movie.”

“It’s disrespectful and hurtful that it’s coming from a Hispanic network when they know the Hispanic community was the most affected in terms of the lives that were taken,” he added.

Worse yet, it seems some of the tactics producers used to get survivors to consent to having their stories included may have been questionable.

“They told me that they had conducted an interview with me a while ago but I couldn’t remember it. She said we didn’t have the paperwork for my interview and they wanted to get it signed,” survivor Orlando Torres told Deadline. “I never did sign the release form. I felt like they were trying to trick me. I put my faith in Univision and they are doing this to me? They even knocked me off their Facebook page when I objected and wrote a statement that they tried to trick me signing this release form for this show.”

“They even have someone playing my part, some actor. The gunman touched me and I thought he was going to shoot me in the back. I played dead. I didn’t want that being re-enacted. What are they thinking?” he added. “Emotionally, this is distressing me. I broke down and cried.”