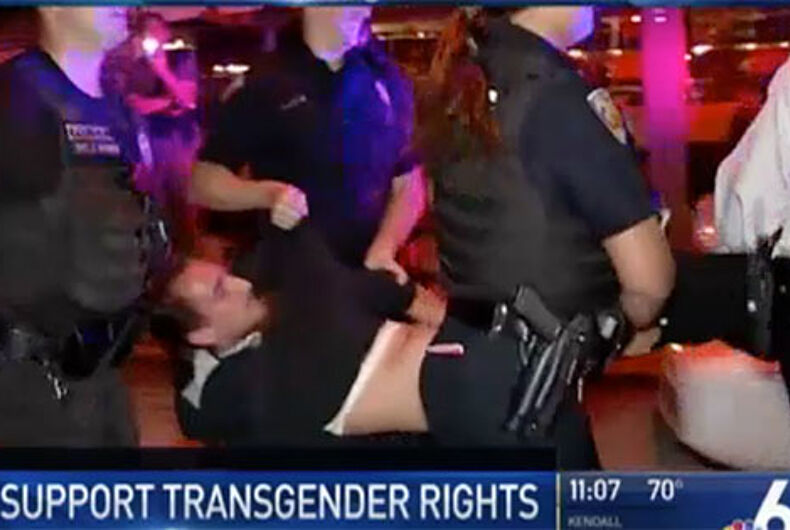 A demonstration against the Trump administration’s reversal of protections for transgender students in Fort Lauderdale, Fla., drew 100 protesters and resulted in an incident in which local police used a taser to subdue and arrest one marcher, and it was all caught on video.

Video footage show the marcher, surrounded by uniformed police officers, was tased and then carted off to a squad car in handcuffs Friday.

The man arrested reportedly wandered off from the main demonstration, into a fenced-off park, after police officers instructed him not to do so. After disobeying those instructions, the unidentified marcher then kicked a tent. WTVJ reports police tried to arrest him, but he resisted.

Only on 6: it started peaceful– but one person tazed & arrested at a #transgender rights march in #FortLauderdale -the story @nbc6 at 11pm pic.twitter.com/mZWMep1asr

He is charged with disorderly conduct and resisting arrest without violence.

Both Miami-Dade and Broward County public schools already have protections in place for trans students, but protesters who showed up said they did so in response to the rollback of trans protections nationwide. One organizer told WTVJ they feel the president has turned his back on the community.

“We have this president who said he was our ally, you know our support and obviously that’s not true. So it’s really messed up that we have this person that a lot of us feel really unsafe under,” said organizer Graciela Mendoza.

“Trans women, especially trans women of color, are still dying on the streets every single day and marriage is not enough,” said organizer Elijah Drummond.

As South Florida Gay News reported, there were 53 transgender murders reported from 2013 to 2015, but not one was prosecuted or reported as a hate crime. A report by the Human Rights Campaign recommends the government and law enforcement agencies improve their efforts to record, report and prosecute incidents of violence against transgender people.