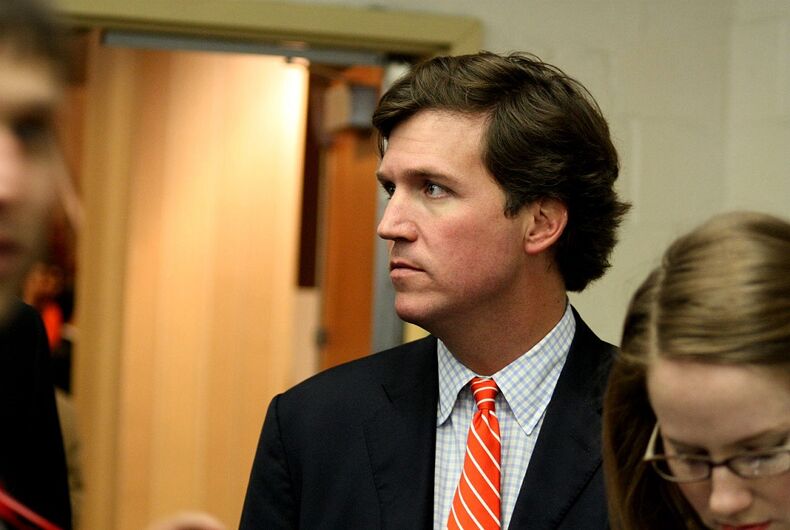 For sheer dedication to bootlicking, no one can beat Vice President Mike Pence. Barely a day goes by without Pence shining President Trump’s shoes with his tongue. Of course, Trump views loyalty as a one-way street, so it’s not surprising rumors floated last June that Trump was considering replacing Pence on the 2020 ticket with former U.N. Ambassador Nikki Haley. Trump happily fueled the rumors by refusing to say he was standing behind Pence, letting the VP twist in the wind a couple of weeks before finally saying he wasn’t changing the ticket.

But in the period while Trump was letting people think that he was open to another pick, all kinds of names were thrown around. A particular favorite among the right was Fox News personality Tucker Carlson.

“The Trump 2020 campaign needs panache, not more cash,” the website Spectator theorized. “If Trump wants to make a switch – as both his predecessors, George W. Bush and Barack Obama, flirted with doing – why would he lean further into the establishment?” Instead, the site speculated, “chatter” had it that Trump was considering Carlson.

The right-wing universe was thrilled at the prospect, even if it was obviously, to borrow a term, fake news. Picking Carlson “would thwart any attempt by the Neo-Cons to reclaim the GOP,” the Columbia Bugle, a right-wing social media outfit, tweeted.

What thrilled the right wasn’t just the idea of Carlson in the White House. It was the prospect that he would be positioned to become the next president.

But what’s to stop that from happening even though Carlson won’t be replacing Pence?

While most of the Republican party establishment has made a Faustian bargain with Trump, Carlson is a true believer. He never had to convert to Trumpism. In fact, he has helped to build it. Not only has he fed nationalist populism with his daily servings on his Fox News show — which has a built-in political base of 2.8 million nightly viewers — Carlson has also been serving as one of Trump’s informal advisors, most recently on foreign relations.

It wasn’t National Security Advisor John Bolton who accompanied Trump on his visit to North Korea. It was Carlson. (Bolton was sent to Outer Mongolia — literally.)

Meanwhile, Carlson has written a best-selling populist manifesto whose title says it all: Ship of Fools: How a Selfish Ruling Class is Bringing America to the Brink of Revolution.  The book isn’t exactly a valentine to Trump — it calls his election a sign of desperation — but it doesn’t dispute the core tenets of Trump’s nationalist populism either. It just makes them look smarter.

A television personality with a large following, a best-selling book, and his finger on the pulse of voters fearful of change — where we have heard that before?

For Pence, it’s all bad news. The party he used to represent had vanished. Even as an ultra-conservative with strong ties to the religious right, he’s a figure from the past. Whoever the Republican nominee will be after Trump won’t be a remnant from the old establishment. It will be someone who has stood behind Trumpism from the beginning, who will whip the base into a frenzy — someone like Carlson.

Carlson may have the veneer of intellectualism that Trump doesn’t, but the anti-LGBTQ bigotry will be the same. After all, earlier this year Carlson used an anti-gay slur on the air and refused to apologize for it. He’s happily confessed to beating up a gay man who “bothered” him and has wondered if trans people are “faking it.” Add to that the not-so-veiled racism, such as his attack on immigrants for making America “dirtier.”

A lot can happen between now and 2024, including bigger problems, like Trump’s re-election or his unwillingless to leave office voluntarily if he loses. But whoever inherits the mantle from Trump will be trying to outdo him, not undo him. On those grounds, Tucker Carlson could be the logical choice for the Republican presidential nomination.