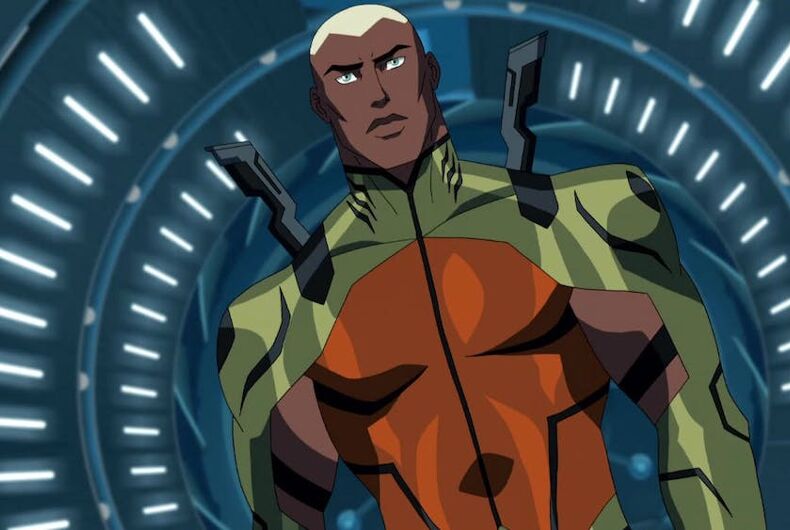 DC Comics continued to expand its roster of out superheroes this week by showing a same-sex kiss between Aquaman and Wynnde on the animated series Young Justice: Outsiders, a show about teenage superheroes.

In the recent episode “Quiet Conversations,” Kaldur-ahm, a character formerly known as Aqualad, took on the name of Aquaman from the original superhero after serving for a while as his protege. After becoming the new Aquaman, he kissed Wynnde, a resident of the underwater kingdom of Atlantis.

Fans seemed to appreciate the reveal.

Related: Marvel wants a trans actress in its upcoming movie & here’s the character it’s likely to be

The new Aquaman is known for being soft-spoken and clear-headed and is more or less the leader of his superhero team. His father is Aquaman’s nemesis Black Manta. Aquaman previously had romantic dealings with girls, hinting at the possibility that he might be bisexual.

Wyynde, an aid to King Orin of Atlantis.

Along with Aquaman, DC Comics fans will have several other gay characters to look forward to. In their upcoming Birds of Prey film, there will be two “gay coded” villains named Black Mask and Victor Zsasz, bisexual villain Harley Quinn and lesbian police detective named Renee Montoya.

The women are expected to be the first out superheroes ever to be explicitly shown as gay in a mainstream motion picture. The Birds of Prey film will be released in 2020 and will follow the story shown in the 2016 film Suicide Squad.

DC Comics’ industry rival Marvel also recently announced that it is seeking a transgender actress to star in one of its upcoming films.

At July’s San Diego Comic-Con, actress Tessa Thompson revealed that she’ll play Marvel’s first explicitly LGBTQ character in the upcoming film Thor: Love and Thunder, reprising her role as Valkyrie. In the film, Valkyrie will search for a queen to rule at her side in New Asgard. She will be the first explicitly queer superhero to appear in a Marvel Studios film.

Tucker Carlson may be Trump’s logical successor as president, not Mike Pence